African and American trypanosomiasis behave very differently from a clinical point of view.

However, they are caused by pathogens that are very similar in nature except that they have a different tissue preference in the body.

The African trypanosomiasis (=African sleeping sickness) is transmitted by the tsetse fly.

Within 1 week of the bite the pathogen ends up in a transformed shape in the bloodstream and the lymph glands.The immune system, if intact, at this point modifies the disease and partially inactivates the pathogen, however, without treatment some parasites survive and multiply again. Eventually the pathogens end up in the heart muscle and the Central Nervous System.

In contrast, the American trypanosomiasis (=Chagas’ disease) is transmitted by biting bugs (called “kissing” or “assassin” bugs , thanks to upload.wikimedia.org for this image) that get infected by reservoir mammals such as dogs, rats, cats and opossums. About 20 million people in the Americas also carry Trypanosoma cruzi, which is a significant reservoir for these bugs. White blood cells from the site of entry that were infected with the pathogen end up in the blood stream and from there they multiply in the heart and other muscles and nervous tissue. Heart disease is usually what characterizes Chagas’ disease. However, seizure disorders from CNS infection and chronic gastrointestinal disease from a loss of normal peristaltic movement in the lower esophagus or in the colon are other manifestations. 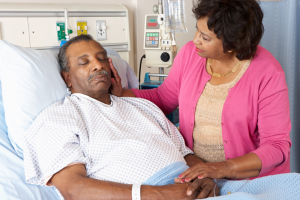 After an initial skin lesion that is painless there is often a pause of symptoms with the African sleeping sickness. Then there is a an intermittent fever, headaches and painful muscles.

Lymph glands can be swollen and typically are in the neck region. About 7 weeks into the infection there is a skin rash with halfmoon-shaped red lines. When the CNS gets involved there are persistent headaches and a change in personality, a daytime tiredness, muscle tremor and gait problems and finally a coma. Without treatment patients die in less than 1 year or after up to 2-3 years of myocarditis or of secondary bacterial infections.

With Chagas’ disease the original bug bite is often overlooked, but 1-2 weeks later there is an acute onset of fever, which carries on for weeks and leads to liver and spleen enlargement as well as lymph gland swelling all over the body. A smaller percentage succumbs to acute heart disease or CNS infection. The larger proportion of patients goes on to the chronic phase of Chagas’ disease. The heart muscle gets infected, which leads to an enlargement of the heart and heart failure. Other cardiac problems are life threatening irregular heart beats (heart block, ventricular fibrillation etc.).

If the nervous plexus that regulates peristalsis of the esophagus is diseased, the Chagas’ megaesophagus can develop. Here the diseased segment of the esophagus that is nonfunctioning balloons into a gigantic reservoir where food assembles, but does not get transported further and eventually blocks the passage of food into the stomach. A similar process can also happen in the colon when the nervous system that controls bowel peristalsis is damaged by the parasite. The result is a megacolon. Megaesophagus leads to swallowing problems, regurgitation, vomiting and aspiration pneumonia, if food ends up in the trachea and lungs. Megacolon can be responsible for chronic constipation and for septicemia, if gut bacteria are ending up in the blood stream. It also can lead to a twisting of the bowel around itself, called intestinal volvulus. This is an acute emergency and one of the causes of acute abdominal pain (see link). In patients with a weakened immune system the acute phase often goes on and the disease ends up in the Central Nervous System (=CNS). It presents as a meningoencephalitis, meaning that the parasites invade both the envelop of the brain (the meninges, leading to meningitis) as well attacking the brain cells of the brain itself (called encephalitis).

The diagnosis is relatively easy in the acute phase where lots of parasites circulate in the blood and they can be detected by a blood smear. However, in the incubation phase or the chronic phase diagnosis is more difficult. Fortunately there are newer tests that have been developed involving polymerase chain reaction amplified DNA detection of parasites. Blood or tissue samples such as lymph node biopsies can be used for this. These tests are highly specific and sensitive. Older tests involve serological testing, but there is an overlap with leishmaniasis, which means that the test is not specific enough.

Although the acute disease can be treated fairly successfully, the parasite that hides inside muscle and nerve cells of the body cannot be eradicated entirely. Therapy for chronic disease is also not satisfactory because we are dealing largely with autoimmune phenomena where autoantibodies have damaged the organs as described above. The cardiac damage with widening of the heart chambers and damage to the conductive intracardiac nerve fibers (inside the heart muscle) is done and cannot be reversed. Heart beat irregularities may respond to insertion of a pacemaker.

In severe cases the only hope for survival is a heart transplant. Esophagus widening from the megaesophagus may be partially repaired by reconstructive surgery, but often it is too extensive to do so. A megacolon can sometimes be removed and an end-to-end anastomosis of healthy colon tissue can reestablish normal bowel function. Two drugs have been developed for trypanosomiasis: nifurtimox and benznidazole. An infection specialist should be in control of such therapy as these drugs have to be taken for a long period of time such as 3 to 4 months, but at the same time they have significant toxic side-effects that have to be carefully monitored (Ref. 1, p. 1248).