In certain areas malaria is a big problem such as in Central America, the northern part of South America, Africa and in Asia. Even in the US in the past malaria was endemic and the Anopheles mosquito, which is the carrier for the Plasmodium species that causes malaria, is still breeding in swamps of Florida, California or New York. Authorities in the US were watchful and observed any case of malaria that travelers brought in to prevent reoccurrence of malaria in the US.

More temperate zones of the northern and southern hemispheres are devoid of malaria as the Anopheles mosquito needs a certain temperature to complete its life cycle. There are four common strains of malaria.

All four strains of malaria have a life cycle of the parasite, which is very similar, but also quite complex.

There are five different forms of the parasite, two of which occur in the female Anopheles mosquito, three of which occur in the human host. Briefly, the mosquito feeds on infected blood of a person with malaria. This releases the gametocytes from the blood that carries the malaria parasites into the mosquito. Within the next 7 to 14 days these multiply involving a sexual process into sporozoites. As they have a high adaptation to human liver cells, they multiply there after the next mosquito bite.

Multiplication of malaria parasite in the liver

After having been bitten by an infected mosquito there is an incubation time of 2 -3 weeks for P. vivax and P.ovale, of 1 1/2 to 2 weeks for P. falciparum. The incubation time for the other strains is much longer. P. malariae takes about 1 month before the patient becomes symptomatic. However, if the patient travels from a tropical area to a temperate area during the time of incubation, the clinical picture becomes modified, particularly, if the person has taken chemoprophylaxis for a period of time (see below). Instead of getting the episodic chills and fever, the patient might get non specific symptoms like backaches, headaches and fevers.

Typically though all forms of malaria start with an abrupt high fever of 40°to 41°C (103 to 106°F), muscle rigidity, frequent urination, an excruciating and worsening headache and an intense feeling of being ill. The fever then suddenly falls, followed by a 2 to 3 hour period of intense sweating. These bouts of fever occur every 48 hours for P. falciparum, P. vivax and P. ovale, for P.malariae they occur every 72 hours. Often though there are mixed strains of Plasmodium species and the fevers are then irregular. The undulating fevers are paralleled by the release of merozoites into the blood stream (fever) and the mass disappearance into uninfected blood cells (breaking of the fever). There are a number of common symptoms for all forms of malaria such as an enlargement of spleen and liver, low red blood cell count (anemia) and jaundice.

With P.falciparum it is of utmost importance to diagnose the disease rapidly as this form of malaria deteriorates quickly. The pathogen has an affinity for the lining of blood vessels and this leads to plugging of small blood vessels with subsequent lack of oxygen and nutrients in vital organs. After only a short period of time patients experience distress with lung function (respiratory distress), bleeding into the retina (possible blindness), kidney failure and often the development of malaria in the brain (cerebral malaria). This is particularly dangerous as the patient often gets into shock and coma, which is often fatal. If a woman is pregnant and gets malaria with P. falciparum, this often leads to placental infection with spontaneous abortion or a stillbirth.

In contrast, P.vivax and P. ovale do not cause vital organ breakdown. The disease is much milder, there is more time to diagnose and treat and it is rare that the patient dies from it. This would be most likely due to sudden splenic rupture from a chronically enlarged and softened up spleen. In cases where a person was born without spleen or where the spleen had been removed for other reasons in the past, overwhelming malaria infection can lead to septicemia, which frequently ends up to be fatal.

In infection with P. malariae there are frequently no specific symptoms with the only positive sign being that there might be a big spleen present. However, this smoldering infection leads to immune complexes that keep the malaria at bay. The other side of the coin though is that these immune complexes lead to immune complex-mediated nephritis (a chronic kidney disease) and “big spleen disease”. As this form of malaria is often without symptoms, persons who are carriers of it may donate blood unaware of their disease and this can cause transfusion malaria. 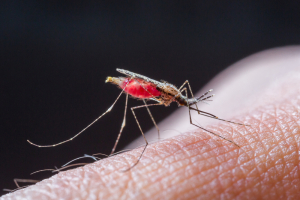 It is important to inquire, if the patient has been in a region endemic for malaria in the past 3 to 5 years. The physician has to assume when confronted with such a patient who has unexplained chills and fevers and an enlarged spleen that the patient could have malaria. Without that index of suspicion the physician might not order a blood smear to look for Plasmodium. If it is positively identified, this confirms the diagnosis. The physician still needs to know which type of malaria it is as therapy is different for different strains. Newer tests (polymerase chain reaction and DNA probes) are being further refined.

Obviously, treatment of a patient in the US should be done by an infection specialist knowledgeable in this field. Remarks here will be very general just to point out the principle of the treatment of malaria. There are many chloroquine-resistant strains in the world, so it is important to know where the patient got infected. Usually P.ovale and P. malariae are chloroquine sensitive. Also, the chloroquine sensitive strains of P. falciparum and P. vivax can be treated with chloroquine. Chloroquine-resistant cases of P.falciparum are treated with oral quinine sulfate or in more severe cases with intravenous quinine dihydrochloride or quinidine gluconate.

Often the infection specialist will supplement the antimalaria regime with other medications to suppress any recurrent malaria. Such medications include familiar antibiotics such as doxycycline and clindamycin. But they also include more obscure names such as sulfadoxine, mefloquine and halofantrine.

Apart from chloroquine therapy with P. ovale and P. vivax primaquine must also be given in order to kill the developmental stages of malaria in the liver cells, as otherwise there would be recurrences of malaria down the road. With the other forms of malaria (P.falciparum and P. malariae) this is not a problem as these parasites do not persist in the liver cells.

Side-effects: There are a number of side-effects of these antimalarial drugs. Ask your physician about them.

Prophylaxis starts with planning a trip. Do you really need to go to a malaria infested region? If the answer is “no”, then don’t go! If this cannot be prevented, then it is important to be prepared to prevent mosquito bites by spraying with pyrethrum-containing insecticide sprays. Mosquito screens on windows and doors and netting sprayed with pyrethrum around the sleep area should be used to keep insects out. Outside wear protective clothing. Avoid being outside during dusk and dawn when more mosquitos are on their way.

Chemoprophylaxis used to start 2 weeks before the trip by taking chloroquine once per week, if you travelled to an area where there is no chloroquine-resistant P. falciparum. Doctors used mefloquine instead of chloroquine for those areas where these resistant strains are present. The traveler coming back from a malaria infested region had to take this drug regime until 4 weeks after the return home. But this prophylaxis was not 100% safe and close observation after your return home was warranted, particularly if the travel destination was to a country that is heavily infested with malaria (Ref. 1, p. 1241).

The traveller takes one tablet per day 1 day before entering a malaria area, continues with one tablet per day while there and carries on for 1 week after coming home. In other words, it takes 5 weeks less time to do a better prophylaxis of malaria than on the old regimen. Overall it is 98.7% effective in treating malaria and close to 100% effective in preventing malaria. The reason for this is that these medications eradicate malaria parasites in the blood as well as in liver tissue. Side effects are headaches in 1 to 2%, some gastrointestinal upsets in 1% and 3% of neuropsychiatric events. It is effective against P.falciparum and P. vivax (Ref. 14).

Ask your family doctor or a travel clinic for the latest malaria prophylaxis before you travel into a malaria infested region.