Tapeworms are usually living in the hosts gut and they have three parts to their anatomy: a head (scolex), a neck and the segments (called “proglottids“, which is mentioned in this review of the dog tapeworm). The head has a suction device or a hook with which it attaches to the inside of the gut, typically in the small intestine.

There is one tapeworm, where the host is the dog and man becomes the intermediate host (target of tissue invasion by the larvae stage) and “hydatid cysts” are found in the liver and in the lungs. This is called hydatid disease.  With the pork tapeworm the adult tapeworm can occur in the gut of man after eating raw meat with the storage form (called”cysticerci“) of Taenia solium. When eggs of T. solium are ingested, for instance from infestation of water, humans become intermediate hosts and the disease, called cysticercosis, can develop. The table above links you to a rundown of the common tapeworms. 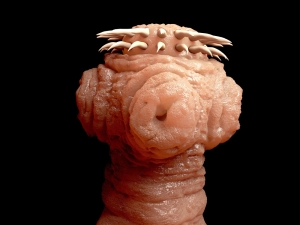