With these physiological facts it is now understandable how cancer from an ovarian tumor, which to the eye still appears intact (stage I or II) can shed cancer cells through transperitoneal dissemination. The cancer cells migrate through the peritoneal flow described above to the right upper abdomen, the liver, the base of the right lung and into the mediastinum. These facts are only known since the late 1980’s and following this the staging laparotomy was developed. This elaborate surgery is performed by cancer surgeons in the major Cancer Centers throughout the world. Taking into consideration the peritoneal fluid flow, there are standard points that are checked within the abdominal cavity and tissue biopsies are taken even when there is no apparent cancer. This way the microscopic spread would become apparent as the pathologist analyzes all the samples.

The surgeon will remove any ovarian cancer metastases that are obvious in a procedure called “cytoreductive surgery”, where not only the visible cancer is removed, but also the affected lymph glands are removed and sent for pathology. This removes much of the tumor load. Later on the patient is treated with the appropriate therapy (chemotherapy and/or radiotherapy). 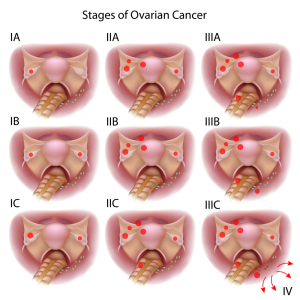 The conventional staging for ovarian cancer uses the FIGO stage grouping. There are four stages I to IV and each has three subclasses A, B and C. The higher the group or the subclass denomination, the worse the outcome(prognosis). The following brief outline explains the staging:

II C :      Like IIA or IIB, but capsule ruptured, cells on surface of tubes or positive peritoneal washings

In addition to this staging system there is also a histological staging system (Broder classification) depending on the maturity of the cells. The higher the number, the worse the prognosis. Broder grade I has a good prognosis, but the worst would be Broder grade IV. The staging procedure takes these factors into account as well.