As mentioned above, diagnosis of ovarian cancer can only be picked up in an early stage if a woman is screened regularly for it. This test consists of the yearly pelvic exam and Pap test to feel for an enlarged ovary.

If the physician feels on bimanual examination that there is an enlarged ovary compared to the other, an ultrasound of the ovaries is ordered. Even in obese women this can be achieved with a vaginal ultrasound, which also eliminates the drinking of a lot of water before the test (the older equipment needed a full bladder as a marker).

This test will tell the physician whether there are solid elements or prominent papillary projections within an ovarian cyst such as would be the case with an early cystadenocarcinoma. Laparoscopy has no place in the work-up or the treatment of cancer of the ovary. Instead a careful staging procedure has to be combined with the surgical removal of the unruptured ovary to prevent the spread of the disease. 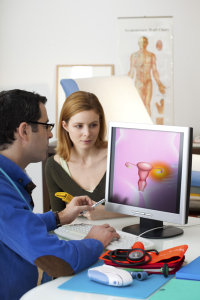 Blood test being developed to screen for ovarian cancer

Newer research is pointing in the direction of a more specific and more reliable way to diagnose ovarian cancer by a simple blood test. This test is done on blood serum and certain proteins (proteomic patterns) that leach from the ovarian cancer into the blood are analyzed spectroscopically in the lab. This research article describes that these physicians are now testing this method in a prospective study. Once successful, it will be as good for screening ovarian cancer in women as the PSA test has been for screening prostate cancer in men.