In stage I and II treatment of Hodgkin’s disease consists of local radiation, which can abort Hodgkin’s disease with very good long-term survival rates. Stage III and IV needs quite sophisticated multi drug chemotherapy followed often by radiotherapy. At present the best combination seems to be doxorubicin, bleomycin, vinblastine and dacarbazine. There are differences, as mentioned earlier, depending on the cell type and the stage that the lymphoma is in at the time of diagnosis. Here is a survival table for a low-grade Hodgkin’s disease:

Patients who do not respond with a complete remission or who relapse within 6 to 12 months following initial chemotherapy, have a very poor prognosis. 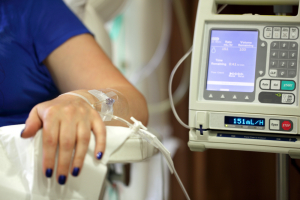 The only hope for long-term survival then is a bone marrow transplantation. In selected patients, who will withstand the initial high chemotherapy dosage to wipe out the Hodgkin’s cells in the system, a bone marrow transplantation can yield cure rates in more than 50% of patients. Unfortunately not every patient with a poor prognosis will be eligible for this vigorous therapy.