In screening blood tests included in diagnostic tests for Hodgkin’s disease there might be a low lymphocyte count coupled with anemia.

If the alkaline phosphatase is elevated in the blood tests, this is highly suggestive of involvement of the bone marrow or liver or both.

As in other forms of cancer, the diagnosis of Hodgkin’s disease is done by biopsy to obtain some tissue from the patient, which is analyzed by the pathologist. The Hodgkin’s cell has a typical appearance under the microscope and is known among physicians as the “Reed-Sternberg cell”.

The diagnosis of Hodgkin’s disease is made when biopsy material or fine needle aspirates from lymph glands, liver, bone marrow or other affected tissue origin is analyzed by the pathologist and Reed-Sternberg cells are found. In the image provided here a normal lymph node pathology slide is shown on the left; on the right side lymphoma cells have invaded the lymph gland obscuring all of the normal landmarks. This is a biopsy sample of a lymph node with Hodgkin’s disease. 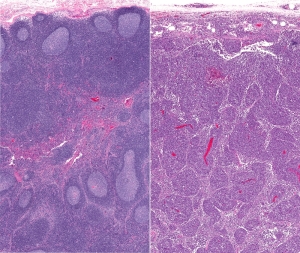 Furthermore with monoclonal antibodies immunotyping can be done, which can help to distinguish in difficult cases between Hodgkin’s disease and non Hodgkin’s disease. This is absolutely mandatory before embarking on invasive therapy.