This normocytic normochromic anemia develops when erythropoietin (=EPO) is not produced enough by the kidney tissue and as a result the bone marrow does not get enough stimulus from the EPO hormone to produce enough red blood cells.

To clarify, the most common causes for this is kidney failure. This can be brought about from kidney diseases where the kidney function is reduced. In short, a low kidney function with a creatinine clearance of below 45 ml per minute, leads to anemia because EPO production decreases. Two disease processes that lead to severe anemia are amyloidosis and diabetic nephropathy. In addition protein deficiency and general starvation can also lead to hypoproliferative anemia. The underlying mechanism is not clear.

These are the same as the general symptoms of lassitude, lack of energy and other symptoms described in the introductory chapter to anemia. On top of this there may be symptoms from kidney failure. There also may be high blood pressure and fluid retention.

There are the laboratory findings of kidney failure with a high BUN, creatinine and a reduced creatinine clearance. In addition there is a low reticulocyte count, fragmentation of RBC’s in the peripheral blood smear and a lack of RBC precursor cells in the bone marrow. 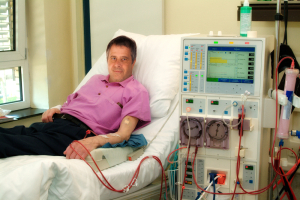 Treatment consists of normalizing the kidney function as much as this is possible, if necessary with dialysis. The physician may consider EPO treatment, starting with a lower dose of 50 to 100 units per kilogram intravenously or subcutaneously three times per week. In addition the physician prescribes iron supplements. After 8 to 12 weeks the patient reaches the maximum response in terms of increasing the RBC level. Maintenance doses are about half of the induction doses.Meanwhile many patients do not require transfusions.