This is a common anemia and is due to either vitamin B12 deficiency or due to folate deficiency. It leads to megaloblasts in the bone marrow. When B12 deficiency is present, a synonym for it is pernicious anemia.

Either of this vitamin deficiency leads to a defect in DNA synthesis of the precursors of red blood cells, but the RNA synthesis continues so that the end result are megaloblasts in the bone marrow that will also appear in the blood. Special staining visualizes them in a blood smear.

Both folate and vitamin B12 deficiency cause megaloblastic anemia

This anemia takes a long time to develop and may not be symptomatic until it is fairly severe. Vitamin B12 deficiency causes neurological symptoms like numbness of the hands, forgetfulness from dementia or subacute combined degeneration in the more severe cases. Folate deficiency leads to symptoms of glossitis (inflammation of the tongue) and diarrhea. Folate deficiency causes the face to look wasted due to frontal muscle atrophy.

When the physician suspects megaloblastic anemia, the indices of the CBC blood test show a macrocytic anemia. A blood smear shows the megaloblastic cells. There are a number of other parameters in the blood smear that a trained hematologist will detect (anisocytosis, poikilocytosis and macroovalocytosis). Also the distribution width of the size of the RBC’s is high. There are so-called Howell-Jolly bodies  in many red blood cells that is a leftover of the cell nucleus of the more immature red blood cell. The reticulocyte count is low as in all hypoproliferative anemias. Because of the change in metabolism with vitamin B12 and folate deficiency there are changes also in the white blood cell line. There is hyper-segmentation of the granulocytes. Granulocytes are the pus cells that fight infection. At the later stages there can be neutropenia (=low white blood cell count) and also thrombocytopenia (=low platelet count).

Distinguishing between folate deficiency and vitamin B12 deficiency

A level of 140 micrograms per liter (or less than 305 nano-moles per liter) would indicate a true folate deficiency. In difficult to diagnose cases the physician determines blood methylmalonic acid (MMA) levels, which are normal in folate deficiency, but are high in the case of B12 deficiency. This will prove a case of pernicious anemia (due to a lack of vitamin B12 absorption). More on MMA and pernicious anemia this in this blog. 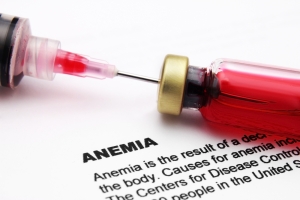 Before treating the patient, the physician must rule out other underlying causes. For instance folate deficiency develops in alcoholism. The patient may have underlying celiac disease or take medication that interferes with folate absorption (e.g. metformin, phenytoin, sulfosalazine etc.). With B12 deficiency there maybe an undetected fish tapeworm that consumes all the dietary B12 vitamins or the patient may have a chronic gastric inflammation where intrinsic factor is missing (pernicious anemia). The stomach wall produces intrinsic factor, which the body needs for absorption of vitamin B12 in the small bowel. Small bowel disorders, gall bladder problems and pancreas disorders are all associated with vitamin B12 deficiency. The physician needs to deal with any underlying disorder.

Usually 1000 to 2000 microgram tablets of vitamin B12 to be taken orally are given daily. Even when an intrinsic factor deficiency is present, there is enough absorption of vitamin B12 (in the past it was thought that vitamin B12 had to be injected). In more severe vitamin B12 deficiencies it is still true that the intramuscular route is preferred with 1 milligram of vitamin B12 intramuscularly one to four times per week until the megaloblastic anemia is corrected. A maintenance program once per month by injection can follow. Unfortunately in elderly patients cognition that was lost will not be regained, but further deterioration will be halted.