In this condition the red blood cells have an elliptic or oval shape and the spleen is enlarged as it filters out these abnormally shaped red blood cells. Elliptocytosis presents clinically as a milder condition than the closely related hereditary spherocytosis.

Symptoms: Hemolysis is often mild or absent; there is a borderline anemia or no anemia at all, but there is often splenomegaly.

Hereditary spherocytosis is an autosomal dominant form of hemolytic anemia. Clinically it presents in a more severe manner than elliptocytosis does. The basic defect is a discrepancy between the intracellular content and the surface area of the cell membrane, which is relatively decreased when compared to normal red blood cells. This results in a stiffness of the red blood cell and the shape is spheric, hence the name “spherocytosis”. The end result is that the red blood cells are too big and not flexible enough to go through the capillaries of the spleen (“spherocytes“, the arrows point to the affected red blood cells).

The spleen is normally equipped to remove deformed red blood cells that are aged. With spherocytosis hemolysis takes place in the spleen leading to splenomegaly and anemia.

There can be varying degrees of gene penetrance so that milder forms may not be detected until there is a viral illness that brings out the underlying hereditary spherocytosis. Jaundice from bilirubin that was released from hemolysis of red blood cells, is usually mild, but the chronically elevated bilirubin can lead to gall stones that are not uncommon. A large spleen (splenomegaly) and a large liver (hepatomegaly) are also common. There may be a family history of a hemolytic anemia, but with a lower gene penetrance it may not be evident for a few generations. In other words, the gene did not express itself or the condition was so mild that it escaped diagnosis.

The diagnostic process often starts with the finding of an unexpected hemolytic anemia, not infrequently in a patient with a large spleen (splenomegaly). The top three images of the CT scan of a patient below shows a large spleen. The blood test (CBC) will show a normal MCV (mean corpuscular volume), but the MCHC (mean corpuscular hemoglobin concentration) is increased. This is coupled with an increase in reticulocytes (immature forms of red blood cells) to between 15% and 30%, and the white blood cell count is often increased as well. With this constellation of blood test results the physician will think about the possibility of spherocytosis and order an osmotic fragility test. The osmotic fragility is tested by immersing small amounts of blood into various salt concentrations. Another method is to check for spontaneous hemolysis by prolonged incubation over 48 hours. To rule out autoimmune hemolysis, the direct Coombs’ test is done, which is negative in spherocytosis. 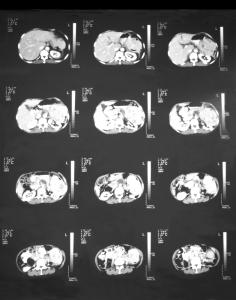 Specific treatment available for the more severe forms of hereditary spherocytosis is the surgical removal of the spleen (splenectomy). Before this is done, the patient receives pneumococcal and meningococcal vaccinations on a preventative basis as following the splenectomy the patient is more susceptible to these serious infections. During the procedure a cholecystectomy is performed, if the patient had pigment gall stones. Following splenectomy the blood values will normalize (anemia, jaundice, and reticulocytosis). The red blood cells will survive longer, but the fragility of the RBC’s remains.

Hemolytic Anemias from Changes in the RBC’s