Anemia Due to Hemolysis

Home » Anemia » Anemia Due to Hemolysis

First of all, anemia due to hemolysis can have many different causes. Hemolysis is a process that dissolves red blood cells, so that they live shorter than the normal 120 days. This can occur because of changes in the red blood cells themselves or because of factors outside of the red blood cells. Damaged RBC’s are removed by phagocytic cells, called “reticulocytes”, in the liver, spleen and in the bone marrow. It seems like these reticulocytes are equipped to dismantle the RBC’s. However, this is done by reutilizing the iron of the hemoglobin molecule and rescuing the heme part as bilirubin. Normally there are a number of enzymes that take care of this automatically. The iron is transported to the bone marrow for reutilization of the iron so that new RBC’s can be made there.

The liver converts hemoglobin into bilirubin and binds it to glucuronide. The liver excretes bilirubin glucuronide into the bile ducts, which ends up in the stool where further enzymatic reactions change it into stercobilin. This gives the stool its brown color. A congenital abnormality of an enzyme will interrupt this enzymatic step. Consequently some of these abnormalities are of clinical significance, but others are only minor.

The symptoms are similar to other forms of anemia. However, hemolysis may present with more pronounced symptoms such as chills, fever, abdominal pain , back pain and general malaise. As a result, in severe cases of hemolysis the patient may have excruciating pain all over and even get into shock. Above all, jaundice and splenomegaly (enlarged spleen) are often also present.

When blood tests of a patient with these symptoms show anemia and reticulocytosis (reticulocytes show a higher value in the blood), the physician would suspect hemolysis as a possible cause of the illness. The hematologist orders a blood smear and looks for possible causes of hemolysis. For instance with spherocytosis the pathologist would find spherically shaped red blood cells. The physician finds an enlarged spleen and there is a family history of similar findings. Osmotic fragility tests show an increased fragility of the red blood cell membrane. The Coombs’ tests shows whether there are autoimmune antibodies that cause autoimmune hemolytic anemia. 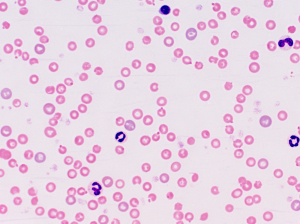 Anemia Due to Hemolysis

Here is a list containing all of the major types of anemias due to hemolysis. You can click on any of these links under “Related Topics” below.

Hemolytic anemias from changes in the RBC’s

Hemolytic anemias from changes outside of the RBC