Erythropoietic protoporphyria (EPP) is a blood disorder due to a hereditary enzyme defect in the heme synthesis of the red blood cell. It presents in infancy when even after a short exposure to sunlight there is a burning pain in the skin.

These individuals develop often gall stones later in life. The condition is inherited in an autosomal dominant fashion. A complicated genetic constellation is necessary to lead to a severe form of this condition. The enzyme ferrochelatase is deficient in red blood cells and precursors of red blood cells (erythropoietic cells) in the bone marrow. This leads to an accumulation of protoporphyrins as the heme synthesis gets blocked. To a certain degree the body can tolerate these, but when they are activated by sunlight that hits the skin, phototoxic protoporphyrins are formed that get metabolized in the liver and excreted in the bile into the gut. These phototoxic protoporphyrins act like free radicals that attack the liver, the bile ducts and the gall bladder. After years of exposure from birth onwards the liver can become cirrhotic, the gallbladder can form gall stones and the biliary ducts can get scarred and become stenotic. Further studies have shown that in addition to the ferrochelatase enzyme defect there is another gene that codes for a low output of the protoporphyrins (low output ferrochelatase allele) that is passed on from the overtly healthy parent. Only when this two gene constellations comes together in the same person, is there a high risk of complications, such as jaundice, liver enlargement and possible nodular cirrhosis with liver failure in 10% of the cases. Only 5 in a million people in the US develop EPP.

Depending on the genetic mix the symptoms can vary greatly. Mild forms may be overlooked until the child is older. An infant with EPP may have unexplained screaming fits for hours after only a brief exposure to sunlight. There may be psychosocial ramifications when a child absolutely refuses to go outside because it has learnt that sun exposure causes excruciating pain in the exposed skin areas. Aggressions, tensions, behavior problems can result from feeling like an “outcast”; in the worst scenario suicidal thoughts and actions can follow. After having been in the sun for prolonged periods skin changes occur with crusts around the lips and the back of the hands. There is no blistering. Without proper skin protection the skin becomes thickened, leathery, particularly around the knuckles. Around the mouth deep skin folds develop (carp mouth). The excretion of large amounts of phototoxic protoporphyrins can cause blockage in the bile ducts with jaundice, cirrhosis of the liver, right upper abdominal pain and general malaise.

When children or adults complain about painful skin photosensitivity without blistering, EPP should be suspected and blood tests should be performed. Levels of protoporphyrins in blood samples are elevated in red blood cells and plasma. The physician can order a test of a genetic marker that has become available, which will predict how susceptible this person is to develop jaundice and liver complications. Family members can also be screened for the low output ferrochelatase gene mutation. It likely would be best for the physician to refer the patient to a genetic expert for genetic counseling. 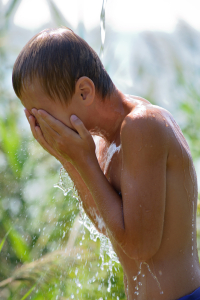 The patient’s painful skin needs to be cooled down with cool baths; wet towels can be applied and pain relievers are given. The treating physician should see the patient regularly to monitor the clinical situation and order appropriate tests. Sunlight exposure needs to be cut down as much as possible and sun screen lotions with a high sun protection factor should be applied to the skin to absorb UVA rays. Zinc oxide sunscreens and others that contain dibenzylmethanes or titanium dioxide may also be useful to protect the skin. Certain drugs that have been identified as being unsafe should be stopped and avoided. Some from this list are very common medications such as barbiturates, lidocaine, and antibiotics like chloramphenicol, erythromycin, sulfonamides or ketoconazole. Ergots used as anti migraine medication also belongs to the drugs to be avoided, as does hydrazine, methyldopa, danazol and synthetic progestins. Fasting as well as alcohol consumption need to be avoided as well as both of these will increase red blood cell production. This in turn will increase the protoporphyrin levels. On the other hand anti-oxidants such as beta-carotenes and cysteine can be useful in stabilizing this condition. Another way how protoporphyrin levels can be decreased is by hyper transfusion of red blood cells. This will shut down the own production of red blood cells with phototoxic protoporphyrins and thus improve symptoms. Elimination of protoporphyrins can be stimulated by giving bile salts. In addition the elimination of bile salts through the bowels can be achieved by charcoal and by cholestyramine, which blocks the reuptake of bile salts through the portal vein system (enterohepatic pathway). If liver failure develops, a swift liver transplant may save the persons life.

Hemolytic Anemias from Changes in the RBC’s