Vitamins Can Reduce The Risk Of Metabolic Syndrome

A South Korean study showed that vitamins can reduce the risk of metabolic syndrome. Metabolic syndrome is a change in metabolism in patients with excess abdominal fat. They also often have high blood sugar, high blood pressure and high LDL cholesterol. In addition their liver often develops non-alcoholic fatty liver disease (NAFLD), which has the potential to make the patient really sick.

Interpretation of the study

Metabolic syndrome is a cluster of conditions as mentioned above that occur together. Hence there is an increased risk of heart attacks, strokes and diabetes. In addition, researchers have shown that patients with metabolic syndrome have inflammation in their blood. Test for this are laboratory tests for the C-reactive protein  (CRP). Part of the inflammatory reactions taking place is the release of free radicals. Antioxidant vitamins like vitamin A or E neutralize these free radicals. This could be the explanation of the findings of this study. If the antioxidant vitamins block the inflammatory reaction in metabolic syndrome, this reduces the percentage of metabolic syndrome among patients. Other studies showed this in the past. 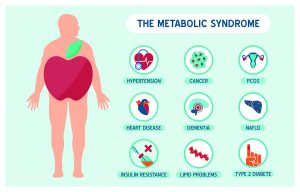 Vitamins Can Reduce The Risk Of Metabolic Syndrome

A South Korean study of both, vitamin A and vitamin E, showed that these vitamins have antioxidant activities. They reduced the percentage of lowering metabolic syndrome in the highest third of supplement takers by 26% to 28%. The study also found that it was the antioxidant activity of these supplements that was responsible for this effect. Metabolic syndrome is an inflammatory condition associated with high values of the C-reactive protein blood test. Free radicals are part of the inflammatory process, and  vitamin A, E and other antioxidants neutralize these free radicals, which contributes to prevention of diseases..