Vitamin E has been known to help prevent heart attacks in the past. But now a new publication has shown that in two human cell lines vitamin E prevented senescence to occur. This was proven by the fact that the human cell lines that included vitamin E continued to divide versus controls that did not.

In a study done in the Augsburg region of Germany (Bavaria) vitamin E was one of the key antioxidants together with selenium, zinc, vitamin C and carotenoids.

Researchers found when examining 2924 participants of that study that vitamin E or any other of the antioxidants did not lower the C-reactive protein, a measure of the inflammatory status in the participants. Inflammatory processes in the body that are manifested in elevated CRP levels are the cause for numerous illnesses, such as cardiovascular disease and arthritis. However, when any of these other antioxidants was combined with more than 78 mg (= more than 70.2 IU) of vitamin E per day in combination, 22% lower CRP levels were found when compared to persons who were not exposed to any vitamin E supplementation. The authors felt that prevention of inflammation-related diseases in the general population may be able to be achieved when multiple antioxidant vitamins were taken, as long as they included vitamin E.

Normally a good preventative dose is considered to be 400 IU of vitamin E per day, although for some conditions higher doses may be recommended.

Another study from August of 2015 showed that younger people who did not supplement with vitamin E and who thought that they would be OK in terms of vitamin E levels just from food intake, were wrong. 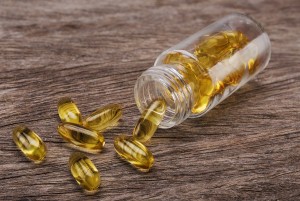 Unlike in the past there is no doubt any more that vitamin E is an important antioxidant vitamin that prevents cardiovascular disease. But now there is evidence that it is also linked to slowing down aging. Even the inflammatory marker, CRP is suppressed by it. As food alone does not elevate your blood levels of vitamin E sufficiently, it is best to supplement with it in the sense of “one vitamin E capsule per day keeps the doctor away”.