Vitamin K2 For Your Arteries

Vitamin K2 (=menaquinone-7 or MK-7) has been known for some time to be needed for prevention of osteoporosis and for prevention of hardening of arteries. But a new study from April 2015 from the Maastricht University in the Netherlands has found that flexibility of arteries, which is associated with youthfulness, can be achieved in postmenopausal women aged 55 to 65 with vitamin K2. 244 postmenopausal women were part of this study; 124 of them received 180 micrograms of vitamin K2, the other 120 women served as a control group and received a placebo. The double blind, placebo-controlled trial lasted for 3 years. Multiple blood tests were taken to look for inflammatory markers, and physical arterial measurements were taken. Using an ultrasound machine the carotid intimal thickening and arterial stiffness was tested by assessing the diameter of the artery at the end of a heartbeat (end-diastolic distension). Carotid-femoral and carotid-radial pulse wave velocity was also recorded giving some measure for aortic stiffness. After three years the carotid arterial stiffness in the vitamin K2 treatment group was 50% of the placebo group indicating that arterial flexibility can be acquired again with the help of vitamin K2. Cardiologists have long known about how important arterial flexibility is for prevention of heart attacks and strokes.

Vitamin D and vitamin K2 have been shown to lower calcium in the blood vessels and to retain calcium in the bone preventing osteoporosis. This is particularly useful in postmenopausal women. This October 2014 publication mentions that apart from vitamin D and vitamin K2, resveratrol and inositol are additional factors helping to prevent heart disease and osteoporosis.

This September 2013 publication confirms that a deficiency for vitamin K2 is common in the general population. This deficiency leads to osteoporosis and calcification of the arterial wall and causes heart attacks, strokes and bone fractures. Supplementation with vitamin K2 every day is recommended to prevent this from occurring. 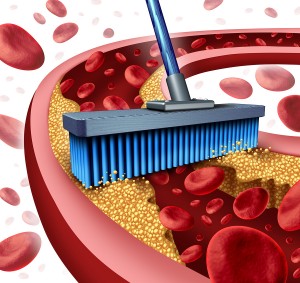 Vitamin K2 For Your Arteries

Vitamin K2 at a dose of 200 micrograms per day in combination with vitamin D3 (4000 to 5000 IU per day) have emerged recently as a powerful tool to prevent osteoporosis and hardening of the arteries. We need to use these supplements to prevent  illness, suffering and premature deaths.

More info on causes of osteoporosis.