Red Meat Can Give You Heart Attacks

A recent study from Oxford University showed that red meat can give you heart attacks. Specifically, the researchers conducted a metaanalysis of 1.4 million people and followed them for over 30 years. They found that 50 Grams (1.75 ounces) of unprocessed red meat including beef, pork and lamb caused 9% more heart attacks after 30 years of observation than those who never ate that food. People who only consumed chicken or turkey meat showed no increased rates of heart attacks. However, consumption of 50 Grams (1.75 ounces) of processed meats in the form of sausages, bacon and ham caused 18% more heart attacks in comparison to those who did not consume processed meats.

The following details are recorded in the original publication.

A 29-year (1987 through 2016) follow-up study determined that plant-based diets help you live longer. The study appeared in the Journal of the American Heart Association on Aug. 7, 2019.In the beginning the study population consisted of 12,168 middle‐aged adults. The findings were also summarized in an article by CNN. The main finding was that people eating a mainly plants in their diet or a diet that consisted of more plant products than meat products, had a 16% lower risk of coming down with cardiovascular diseases. It also had an association with 25% less mortality from early death.

The study did not insist on 100% plant food, but rather monitored what percentage of plants in food the individual consumes. The senior author of the study was Casey Rebholz, an assistant professor at the John Hopkins Bloomberg School of Public Health in Baltimore. “Plant-based diets emphasize higher intakes of plant foods and lower intakes of animal foods. Foods derived from plants include ,” Rebholz said. Animal products were meat, eggs, dairy, and fish or seafood. 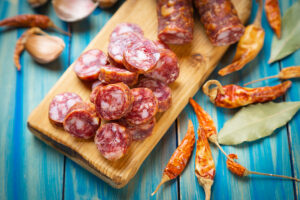 Red Meat Can Give You Heart Attacks

Researchers knew for some time that red meat and meat products like sausage, bacon or ham are harmful to our health and lead to more cardiovascular disease. However, newer studies have proven without any doubt that plant-based diets are healthier than meat-based ones. Over the years I have changed my diet from a diet with more read meat to a diet richer in plant foods and with much less red meat and no processed red meat. If we want to live a healthier and longer life, this type of nutrition helps us. While I find a balanced diet enjoyable, I know many people who find that they cannot do it. It may be initially difficult to quit the love affair with steaks, hamburgers and bacon. But it is not impossible to adjust to recipes. You can  make meat an accompaniment rather than the center of a meal. Gradual change works!

My suggestion is to gradually introduce more vegetables and salads into your diet. At the same time, you can replace some of the red meat with chicken and turkey meat. Avoid red meat products because they contain potentially harmful nutrients such as animal fats, animal-based iron and nitrite preservatives. You will stay healthier for longer than individuals who insist on red meat and processed red meat. Heart attacks in that group are more common.Note: Part of this review was previously published here.