A 29-year (1987 through 2016) follow-up study determined that plant-based diets help you live longer. The study appeared  in the Journal of the American Heart Association on Aug. 7, 2019.

In the beginning of the study the study population consisted of 12,168 middle‐aged adults. The findings were also summarized in an article by CNN. The main finding was that a mainly plant-based diet or a diet that has more plants in it than meat products, showed a 16% lower risk of coming down with cardiovascular diseases. It also had an association with 25% less mortality from early death.

Limitations of the study

The authors admitted that the data is now somewhat outdated with the first observations going back to 1987. The data was based on subjects self-reporting their food intake posing a risk of measurement error. At this point there is an association of data, but more research is necessary to show whether there is a causal relationship.

According to the WHO cardiovascular disease is the #1 killer in the world.

There are several mechanisms of how plant-based diets improve your life expectancy. They are higher in fiber, plant fats, potassium, and antioxidants. But they also are lower in potentially harmful nutrients such as animal fats, animal-based iron and nitrite preservatives. Plant-based diets lead to healthier body weights, lower risk of type- 2 diabetes, lower inflammation and better blood pressure. In addition the blood vessels function better and gut bacteria produce more beneficial metabolites. All of this together translates into lower cardiovascular risk. 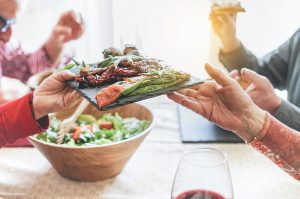 We heard it all before that plant-based diets are healthier than animal-based diets. But now a study that spanned over 29 years has shown better survival numbers for people on a plant-based diet. They had 16% less heart attacks, strokes, heart failure and arrhythmias than animal food lovers. Persons who ate mostly plant-based foods also had a 32% lower risk of dying from cardiovascular disease and an 18%-25% lower risk to die an early death from any cause. These are impressive data. More research is necessary though to translate these associations into data about causation. The researchers did show that we live longer, the less animal products we consume. It is plant products that add longevity.