The fact that VIOXX has been taken off the market in 2004 because of cardiovascular side effects makes one wonder about the whole group of COX-2 anti-inflammatories. The FDA reviewed COX-2 inhibitor group drugs in 2006. They decided to only put a black box FDA warning on COX-2 inhibitors and they are still on the market today.

A new study in the medical journal Neurology (Nov. 5, 2014) showed that patients who take COX-2 inhibitors have an increased risk to get a stroke and when they get it have a 40 to 50% higher risk to die from it than non-users.

Researchers performed the studies at the Aarhus University Hospital in Aarhus, Denmark. Researchers examined medical records of 100,000 people who were in hospital for their first stroke. This spanned a time period from 2004 to 2012. When stroke patients who took COX-2 inhibitors before the stroke were compared to those who were not on the drug, there was a 19% higher probability that the stroke patients on COX-2 inhibitor would die.

Patients who just started taking COX-2 inhibitors were even more at risk of dying after a stroke. There was a whopping 42% higher risk than for non-drug users. Newer is not always better: the newer COX-2 inhibitor etodolac (brand name Lodine or Lodine XL) has the worst risk of them all, namely a 53% probability to die from a stroke in comparison to non-users. At this point newer versions of COX-2 inhibitors have been pulled form shelves in pharmacies, but older drugs are still available. 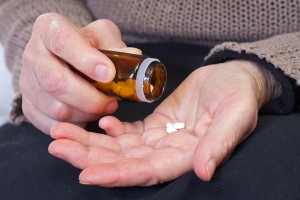 Study co-author Christian Christiansen, PhD of Aarhus University Hospital said that the 30 day death rate increased by 20% in patients who were on a COX-2 inhibitor before hospital admission for their stroke. This effect was not evident in patients who were taking regular non-steroidal anti-inflammatory drugs (NSAIDs). These older NSAIDs are what you know as ibuprofen (brand names: Advil, Motrin) and naproxen (brand name: Aleve). The authors of this study recommended to use the older NSAIDs again. The reason is that they cause less strokes than the COX-2 inhibitors.

Taking all these facts together, the conclusion that comes to mind is the following: newer is not always better!

More information about gastritis being caused by NSAIDs: https://nethealthbook.com/digestive-system-and-gastrointestinal-disorders/gastritis/