A new publication in the Lancet stated that a global diet saves lives.  Several scientists concluded that we eat too much sugar and red meat. In the planetary health diet there would be a reduction of 50% in sugar and red meat consumption. When people start eating less red meat, there will be less methane production from the manure of cattle. Here is a summary of the study in a CNN report.

What is the planetary health diet?

It is a global reference diet, and the researchers hope that people will accept it all over the world. It provides healthy meal plans for people above the age of 2 and will result in less heart attacks, strokes and diabetes. As already indicated the consumption of red meat and sugar will decrease by more than 50%. Instead the consumption of nuts, fruit, vegetables, and legumes will more than double I comparison to now. People will eat more unsaturated fats than saturated fats.

The research team said that if this diet were adopted globally, a total of 10.9 to 11.6 million premature deaths could be avoided every year. This translates into reducing the total death rate by19% to 23.6% every year.

To achieve these goals globally, it requires a lot of administrative support from various government branches. Johan Rockström, professor of environmental science at the Stockholm Resilience Centre, Stockholm University, in Sweden, led the study. He said that apart from major dietary changes of the world population improved food production was required as well as technology changes and reduction in food waste.

Rockström said: “Designing and initializing sustainable food systems that can deliver healthy diets for a growing and wealthier world population presents a formidable challenge. This is nothing less than a new global agricultural revolution.” But he added: “The solutions do exist. It is about behavioral change. It’s about technologies. It’s about policies and It’s about regulations. But we know how to do this.”

A word of caution about unsaturated fatty acids

You noticed that the planetary health diet is switching fatty acids to more unsaturated fatty acids. The cell membrane consists of two lipid layers at a specific ratio of omega-6 essential fatty acids and omega-3 essential fatty acids. It also contains triglycerides, phospholipids and protein. Safflower oil, canola oil, sunflower seed oil, corn oil, soybean oil and grape seed oil are mostly omega-6 polyunsaturated fatty acids, the type that prevail in processed foods. With the consumption of too much processed food the body has a problem constructing cell membranes. When you compare the metabolism of omega-6 fatty acids with that of omega-3 fatty acids, there is a fundamental difference. The linoleic acid of omega-6 fatty acids metabolizes into arachidonic acid, which causes pro-inflammatory mediators, PGE2 and LTB4. On the other hand with omega-3 fatty acids alpha-linolenic acid (ALA) is metabolized into EPA, DHA and the anti-inflammatory mediators PGE3 and LTB5.

It is easy to understand why a surplus of omega-6 fatty acids from processed foods will disbalance the omega-6 to omega-3 ratio. This ratio should be 1:1 to 3:1, but many Americans’ omega-6 to omega-3 ratio is 6:1 to 18:1. Omega-6-fatty acids cause arthritis, heart disease and strokes. Be particularly careful in avoiding soybean oil, which is the most popular oil in the last few decades to foul up the omega-6 to omega-3 ratio through processed foods. Read labels to avoid soybean oil and other omega-6 fatty acids. It is much healthier to replace all polyunsaturated fatty acids with extra virgin olive oil, a mainly monounsaturated fat. Olive oil has been tested in many clinical trials to be exceptionally healthy for the prevention of heart attacks and strokes. This is part of Mediterranean cooking. 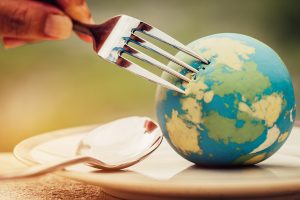 The world population will be approaching 10 billion people by the year 2050. We need to plan for a sustainable planetary health diet. This is exactly what a group of scientists have done. They published their findings in the Lancet. This diet recommends cutting down on red meat consumption and reducing sugar intake significantly as well. We should eat more nuts, vegetables and legumes. Overall this diet is similar to a Mediterranean diet.

One of the scientists not involved in the study said that meeting the food waste reduction target will be a “very difficult thing to achieve” because it would require government, communities and individual households to come together. But she said that it could be done, given enough will power.

This new approach will prevent heart attacks, strokes and diabetes. But it will also preserve our planet by ensuring sustainability of the agricultural industry worldwide.