Fiber Is Good For You

Fiber is good for you as it has been proven to be beneficial for prevention of cardiovascular diseases and various cancers in the past; now it has been studied again in a much larger study population as was reported recently in the media. This news report was based on this medical study.

Death rates from cancer, cardiovascular disease (CVD), diabetes, respiratory disease, infections, and other causes were found to be significantly reduced in the high fiber group compared to a low fiber intake group. The difference between death rates of the high fiber group versus the low fiber group was 17% less. There were also lower rates of mortality for each of the specific diseases mentioned above with higher fiber intake.

Critique of this study

The study appears flawless on the surface as it has a lot of power due to being a prospective study (rather than retrospective) and having a large amount of participants (more than 300,000). But looking closer, there are weaknesses: there was only one assessment of nutrition in the beginning of a 14-year study. There should have been 3 to 4 observation points to see whether a person’s nutritional intake has changed. The authors did admit to this flaw at the end of their publication.

The study included 367,442 participants; anybody with cancer, heart disease, and diabetes at the baseline examination was excluded, so almost 200,000 people did not enter the study, which could introduce a certain bias towards a better outcome. The authors also admit that they did not distinguish between whole grain intake and fiber intake.

There is a remarkable absence of any fiber different from cereal fiber, which makes the publication suspicious in terms of being biased towards the food processing industry, especially the branch that deals with breakfast cereals.

It is only true that a breakfast cereal is beneficial, if the sugar content is minimal. Fiber One is one example among the processed cereals that contains no sugar. However, most of the processed examples do contain significant amounts of sugar. As a rule of thumb the consumer can be certain that with lower levels in fiber, the levels of sugar will be higher. You see this by comparing nutritional contents of various products. 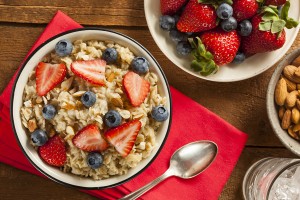 Fiber Is Good For You

I still maintain that this is a good study showing that high fiber and low sugar content of foods consumed will lead to more health. Starchy foods listed in the study should be restricted as much as possible. Introduce more vegetable fiber into your diet, because other studies have shown that this will reduce death rates even further. Sugar and starchy foods have been shown in many studies to be the culprits that cause cancer, cardiovascular disease (CVD) and diabetes.

More information on the risks for hardening of arteries (arteriosclerosis).