Beneficial Effects of The Mediterranean Diet on The Gut Flora

Recently the British Medical Journal described the beneficial effects of the Mediterranean diet on the gut flora. It was a one-year study where 612 elderly people from the Netherlands, France, Italy, Poland, and the United Kingdom were observed. That is to say, 323 of them consumed a Mediterranean diet for a year, the rest served as controls. In detail, the diet consisted of fruit and vegetables, legumes, nuts, olive oil, fish, little red meat and limited amounts of sugar and saturated fats.

Here are the findings of the study in point form.

Here is a link to the original BMJ research article. Other studies showed in that past that a balanced gut biome is important for healthy aging.

If you are not used to cooking a Mediterranean meal, here is a link to some of the basics. The diet consists of simple plant-based cooking. The ingredients are common fruit and vegetables. Whoever cooks prepares food from real unprocessed foods. You avoid processed foods as they typically contain too much sugar, salt, wheat and often also MSG. Whole grains, beans and seeds as well as a few nuts are also part of the meal preparation. Extra virgin olive oil appears in the cooking process and as part of the salad dressing. Some grated or shaved Parmesan cheese completes the meal preparation process. 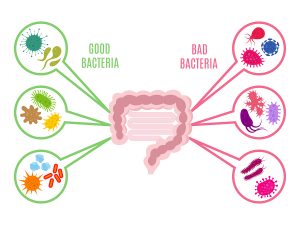 Beneficial Effects of The Mediterranean Diet on The Gut Flora

A new study in the British Medical Journal followed 323 subjects on a Mediterranean diet and 289 controls for 21 years. The gut microbiome showed improvement in the test group with more diverse bacterial growth. The quality of the gut biome improved the walking speed and improved grip strength in these subjects. The findings were constant in members of all 5 countries, showing that the finding was not dependent on nationality. Body weight and age did not matter either. Bone loss in people with osteoporosis showed improvement in those who were eating the Mediterranean diet.

It is obvious that this dietary approach is important in the prevention of illness and disability.