Scoliosis is often congenital (called “idiopathic scoliosis”), but comes out only during the growth spurts between age 10 and 16.

In this age group about 2% to 3% develop scoliosis and about 70% of them are girls (Ref.3). Scoliosis is a sidewards curvature of the spine with a degree of rotation as well. This leads to an abnormal posture of the ribs with a chest hump, which is most visible with forward flexion of the spine (see below). As we do not know the exact reason why some children get scoliosis compared to others, it is called “idiopathic” scoliosis meaning “we don’t know” the reason. These cases are the most common ones. The other cases are called “acquired scoliosis” as they occur following back injuries.

Scoliosis is often without symptoms

Scoliosis may be entirely without symptoms. It presents by physical appearance where one shoulder is carried higher than the other. Or the clothes do not fall straight due to the reverse S curve of the spinal column. With forward bending a shoulder hump is visible as the upper rib cage and shoulder blade sticks out more on one side than the other. Orthopedic surgeons have classified scoliosis into various degrees of severity, which can be determined by X-ray examinations. 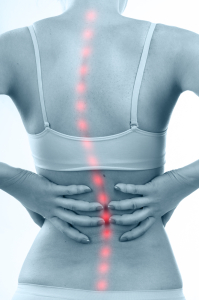 Mild cases are left alone, moderate cases are treated with bracing and severe cases can be treated with corrective surgery. Untreated severe scoliosis can seriously affect circulation through the lungs and lead to congestive heart failure. The exercise tolerance would be severely affected in these patients. However, with the introduction of Harrington rods and spinal fusion surgery techniques, also called ankylosis, things have changed considerably.

An orthopedic surgeon can insert Harrington rods, which are steel rods. The surgeon inserts them parallel to the spine. In the past this surgical procedure was thought to be necessary. However, it unnecessarily stiffened the spine too much. Since then King has classified idiopathic scoliosis into 5 types and a more conservative approach with limited fusion surgery in the thoracic spine has been introduced (see Ref.4 and 5). Only a minority of patients have to have this surgery done. The treating physician can observe the majority of patients or treat them with bracing.