Multiple myeloma is a bone marrow cancer that develops in the bone marrow of the long bones (arms and legs), the vertebral bodies and the skull bone. It is important to realize that this is the most common bone cancer.

Surely, most patients are older than 40 years. This tumor is slightly more common in males (1.6 fold) than females. Blacks are affected twice as often as whites.

Another key point is that it develops out of B-lymphocytes, which are the antibody producing immune cells originating in the bone marrow. It must be remembered that these cells multiply and produce abnormal antibodies, which are highly visible on a blood test called serum protein electrophoresis.

An abnormal M spike shows up on this test. In the past this protein was called Bence Jones protein (now ” M protein”) and this term is still used today. With this in mind, this circulating protein is also secreted into the urine and can be detected there. It causes kidney damage and finally kidney failure.

Unexplained bone pains in the back or chest cage should alarm the physician to the possibility of multiple myeloma.

Kidney failure may be asymptomatic in the beginning, but would show up on blood tests (elevated BUN and creatinine). However, nighttime urination(“nocturia”) due to an inability of the patient’s kidneys to concentrate the urine during the night, could be one of the symptoms. As the kidney function deteriorates, symptoms of lassitude, lack of concentration and fatigue are setting in. Anemia occurs as a result of the suppression of the normal B cells in the bone marrow. This leads to weakness and fatigue as well.

Recurrent bacterial infections are common as a result of a loss of normal immune cell function. Also common are compression fractures of the vertebral bodies pathological fractures of the long bones and of the arms and legs.

This occurs as the bone structure is changed from the clusters of multiple myeloma cells, which have been termed long time ago as “plasmacytoma” lesions by the pathologists. Wherever a plasmacytoma lesion is found the bone structure is weakened and normal day to day activities suddenly lead to pathological fractures. In the skull plasmacytoma lesions can also be found with multiple myeloma and X-rays of the skull would detect these typical lesions.

The physician makes the diagnosis based on blood tests, X rays and biopsy tests. The serum M protein on serum protein electrophoresis is very suggestive of multiple myeloma. X-rays of bones that are painful may show either the punched-out lytic lesions or diffuse osteoporosis. Bone marrow biopsy or bone marrow aspiration can directly lead to a histological diagnosis. Due to the patchiness of multiple myeloma it may be difficult in the beginning of the disease to hit one of the plasmacytoma lesions with these tests. 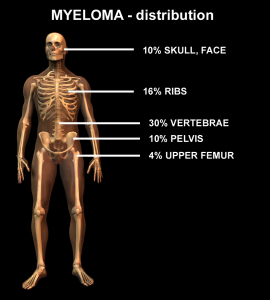 Multiple myeloma is a progressive disease, but progression can be delayed significantly with attention to detail and interventional therapy tailored to the needs of the patient. The overall survival is 2.5 to 3 years, but depending on the extent of the disease at diagnosis this can be modified significantly, in some cases with survivals of up to 10 to 20 years.

Generally speaking poor prognostic indicators at the time of the initial diagnosis are: high levels of M protein in serum or urine, diffuse bone lesions, anemia, high blood calcium levels and renal failure. All of these parameters are basically signs that the disease has spread all over the body, that there is a higher mass of total tumor cells in the body, which has already led to bone marrow suppression (anemia, higher infection rates, increased serum calcium levels) and the resulting high M protein has already led to kidney damage.

This would be the equivalent of a stage IV cancer. The hematologist would do some thorough initial testing prior to chemotherapy to evaluate what stage the patient is in.

Non-specific measures in the treatment of multiple myeloma

Treatment consists of some non-specific measures such as rehydration and increasing physical activity of the patient. This will help kidney perfusion and help in bringing down the hypercalcemia (= high blood calcium level). It might be necessary to give occasional palliative radiotherapy treatments to foci of pain to control the underlying plasmacytoma.

This controls the pain and often changes a bone destroying (osteolytic) lesion into a bone producing (osteoblastic) lesion. There is then a lesser chance of a pathological fracture. The patient is also easier to mobilize as the bone pain typically subsides with focal radiation. For the same reason all patients should receive pamidronate (brand-name”AREDIA”) once per month as a slow intravenous perfusion and diluted in 500 cc of normal saline, given over at least 4 hours. This will lessen bone pain, prolong complications due to fractures that are now less frequent, lower analgesic use and prolong survival. The physician orders prednisone in doses of 60 to 80 mg per day to control hypercalcemia.

Uric acid levels can get out of control

High uric acid levels are occasionally a problem from high cell turnover. The physician controls this by using allopurinol in doses of 300mg per day. Infection is controlled by specific antibiotic therapy when bacterial infections have been identified and bacteria have been isolated by cultures. On the other hand occasionally there might be a need for prophylactic intravenous immunoglobulin when chemotherapy has led to extremely low white blood cells in the blood. The physician treats anemia with packed red blood cells. In case of a renal cause of anemia the physician may use human recombinant erythropoietin, which is a hormone that stimulates red blood cell production very effectively thus reversing the anemia.

Specific treatment consists of chemotherapy, which will decrease the M protein and stabilize the disease. Alkylating agents such as melphalan and cyclophosphamide have lead to a median survival extension by a factor of 3- to 7-fold. The physician orders prednisone intermittently along with chemotherapy to protect the normal bone marrow. Both chemotherapeutic drugs lower the white blood count and the platelet count, which makes it important to monitor these by blood tests about 2 weeks after initiation of chemotherapy to avoid life threatening complications of infection or bleeding.

The orchestration of this complex therapy requires close cooperation of the patient with a dedicated hematologist. Regular follow-up visits with frequent blood tests are necessary to strike a balance between controlling the multiple myeloma and yet maintaining vital body functions.  This is minimizing the cytotoxic side-effects of the chemotherapeutic agents.

A research team has published a new approach, namely through stimulation of the immune system with the measles vaccine. The physician can combine this with other treatment modalities. Read more about this in this blog.