The urethra in the male is part of the ejaculatory tract. Along the urethra there are so-called periurethral glands, which are microscopically small, but are all around the urethra that spans from the level of the bladder to the exit of the urethra. These glands can get infected with a variety of bacteria and viruses, most of which are transmitted sexually from person to person. Common pathogens are: Chlamydia trachomatis, Neisseria gonorrhea and herpes simplex (Ref. 3, p. 1326).

In women the opening of the urethra is in close proximity to the vaginal entrance and inflammatory conditions of the vagina can spill over into the lower end of the urethra.

A woman with a vaginitis from Candida albicans or from Trichomonas vaginalis can experience painful voiding (called”dysuria” in medical terms), which is one of the main symptoms of urethritis.

However, associated with these conditions, there is also a discharge from the vagina with a bad odor and painful sex (“dyspareunia”). Sexually transmitted urethritis is usually slower in onset and milder in terms of symptoms. When it produces dysuria, there usually are no vaginal symptoms associated with it. Contrary to a UTI there is usually no blood in the urine. When the urethritis is more established, there is a pussy discharge, dysuria and more frequent voiding. In men the first sign of urethritis might be a discharge from the opening of the urethra at the tip of the penis. This is pussy when it is due to Neisseria gonorrhea, the cause of gonorrhea. If it is due to “non specific urethritis” (meaning it is not due to gonorrhea), it would be a whitish mucous discharge and would mostly reveal Chlamydia trachomatis or else Ureaplasma urealyticum or Mycoplasma genitalium in lab tests (Ref. 3, p.1326). The cross section of the urethra shows many folds where bacteria can hide and multiply. 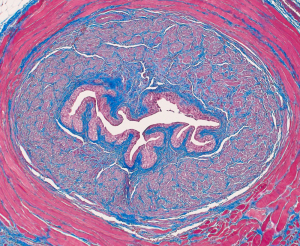 In the past the only bacterium that could be cultured was Neisseria gonorrhea, the cause of gonorrhea. However, in the last decade newer tests have become commercially available allowing to actually diagnose many of the “non specific” or nongonococcal urethritis cases. More than 50 % of these nowadays are due to Chlamydia trachomatis. The likely reason is the long incubation time of 1 to 4 weeks before persons know that “something is not right” and they see their physician. By that time other partners may have been infected, which makes it difficult from an epidemiological point of view to get a handle on the situation.

The physician can take a swab of the urethral entrance in the male, in the female two swabs are often taken, one from the urethral opening and one from the opening of the cervical canal as Chlamydia trachomatis likes to multiply in that mucous environment. At the present time it is impractical to culture Ureaplasma urealyticum or Mycoplasma genitalium.

It is important to determine what the reason for the infection was. This is closely linked to the diagnosis of the underlying pathogen that caused the condition. As mentioned above, in most cases the cause is a sexually transmitted urethritis. Therapy in these cases must be given to the patient and the sexual partner as well to interrupt the infectious chain. In case there were multiple partners involved, these should all be treated, although this is often impossible to do in practice (Ref. 4). The following table has been compiled from data based on Ref. 3 and 4.

Therapy of urethritis caused by:

Candida albicans : fluconazole 200 mg once daily for 5 to 7 days

Another fact is that sexually transmitted urethritis, like any other form of venereal disease, often involves more than one pathogen: two common combinations are Neisseria gonorrhea and Chlamydia trachomatis as well as Neisseria gonorrhea and Trichomonas vaginalis. This, apart from resistant pathogens, is often the reason for treatment failures. However, with repeat cultures and tests the physician can work this out to the benefit of the patient.