Infections of the ureter technically would be called “ureteritis”, although most physicians prefer to use the term UTI, which is the short form of “urinary tract infection”. The ureter rarely is infected alone, but there is either a pyelonephritis or a cystitis associated with it. In fact, often the whole urinary tract gets infected. Still, it makes sense to conceptually separate the ureter from the rest of the urinary tract, because there are some peculiar anatomical abnormalities that can give rise to recurrent infections starting there.

In fetal life there are two ureters on each side, so that a duplication of the ureter on each side is possible and sometimes only half of a ureter is duplicated, but ends up in a blind loop. Any of those congenital anatomical abnormalities can be a cause of infection. A stenosis is a narrowing of the ureter and this can be congenital.

Also a tortuous piece of ureter or a missing valve mechanism in the lower end (ureter/bladder junction) leading to reflux of urine from the bladder into the ureter, can be found as congenital abnormalities in children and adults who have frequent UTI’s. Certain neurological complications of diseases like multiple sclerosis, Lou Gehrig disease, diabetic neuropathy, stroke, spasticity and others can lead to urine transportation problems through the ureter and the bladder leading to spastic or atonic bladder. Frequent UTI’s with problem bugs like Pseudomonas, Proteus or Klebsiella can be very frustrating for the physician to treat. Other causes of UTI’s in the ureter can be cancer of the lining of the ureter, a kidney stone that has migrated into the ureter or trauma (accidental cutting during pelvic surgical procedures such as hysterectomies, or gun shot wounds). All of these various condition tend to cause chronic recurrent UTI’s (Ref.2,p.227).

The symptoms depend very much on what the underlying cause of ureter infection is. For instance, with a kidney stone the symptoms are much more due to the renal colic and maybe small ureter lacerations from the stone leading to blood in the urine. The fever and frequent urination, which would be part of the urinary tract infection, is more in the background. On the other hand a history of blood in the urine and weight loss in association with a UTI may point to a cancer of the ureter or kidney. Often the only pointer that something is not right is the fact that a person gets frequent recurrent urinary tract infections. Congenital abnormalities such as a tortuous ureter , a duplicated ureter system, a diverticle or other abnormalities are often picked up in the process of a workup for recurrent UTI’s. The tests are similar to the ones described above for pyelonephritis. 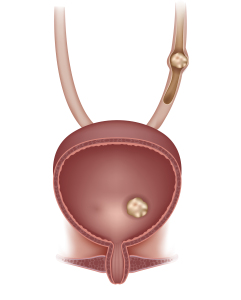 The objective of the treatment is to treat the infection until urine is sterile and at the same time to correct the underlying cause.

In the case of a duplication of the ureter system, the urologist may decide to remove a dead end piece, where no urine flows through, but in another case the specialist may decide to leave it alone. A cancer has to mostly be eradicated with fairly invasive surgery, possibly followed by radiotherapy or chemotherapy. Antibiotics are used according to sensitivity tests in the lab. If there is a reflux problem at the ureter/bladder junction from a congenital problem with the valve, a ureter revision and implantation has to be done by the urologist to solve the problem. In some cases where the underlying problem cannot be fixed, the specialist may decide to put the patient on continuous low dose sulfonamide antibiotics.

These are a few references that describe urinary tract infections in more detail.