The plague caused the death of millions in the middle ages. This was because of poor hygiene and the lack of antibiotics. Rats were the reservoir for fleas containing the plague bugs that would jump to humans, bite their skin and infect them with the bacterium, Yersinia pestis. In the United States the first cases occurred only in 1900 as part of the third pandemic that had started in China. At that time steamships rats and merchandise from Hong Kong were brought to harbor cities in the west. As the rats carried the infection it caused outbreaks of the plague. The last epidemic in the US was in Los Angeles from 1924 to 1925. Since then there have been sporadic cases of the plague, mainly the bubonic type.

Types of the plague

Depending on the transmission of the plague there are three different types.

90% of cases today are transmitted through fleas from infected pets or rats. The infected fleas are what transmit the bacteria to humans. Once inside the body they travel along the lymphatic vessels into the regional lymph glands. Typically this involves the inguinal lymph glands, but can also involve the cervical or axillary lymph glands. They multiply rapidly there and cause a painful protruding “bubo” (like an abscess, with Yersinia bacilli).

When a person is sick with the plague a cough can develop and bacteria are coughed out. If another person comes along and breathes the infected air, this can very quickly lead to pneumonic plague. This is how 50 million people perished in the middle ages. With aerosol dissemination in bio warfare this would be primarily the way the plague would present.

Both the bubonic and the pneumonic plague eventually become septicemic plague when the Yersinia pestis bacteria end up in the systemic circulation. Fingers, nose and toes often become black, hence the name “black death”.

The various types of plague have different symptoms. Briefly, patients with the bubonic plague develop a sudden fever, chills, headaches and weakness. They also have one or more tender, swollen lymph glands, which have the name buboes. If untreated, the infection can quickly spread into the blood stream and turn into septicemic plague.

People developing pneumonic plague have a high fever, cough and they develop pneumonia rapidly. This may develop by contacting people with untreated bubonic or septicemic plague. Death can occur 1 to 3 days after the start of symptoms.

Patients who have septicemic plague develop a high fever, shock and bleeding into the skin and organs. Gangrene of fingers, toes and the nose can occur.

An aspirate from a bubo can be cultured and also stained directly looking for the gram-negative characteristic Yersinia pestis bacteria. In addition a fluorescence antibody test exists, which is more specific.

An ELISA antibody titer from a blood sample is even more specific, particularly if there is a 4-fold or greater rise in titer with a second sample when the patient has recovered after specific antibiotic therapy.

Treatment of the plague

The physician treats contacts with a course of doxycycline. A vaccine against the plague is available, but it is not that effective and the partially protective effect wears off after just a few months. Researchers detected a new group of drugs, the arylomycins recently that seem effective against resistant Yersinia pestis strains.

The Public Health Department needs to have a sanitary program in place. This is how government bodies to control rodent infestations. The infectious chain between rodents in the area and house pets like dogs and cats must be broken. Pets should be sprayed against lice from time to time, particularly when there was a plague outbreak.

Since 1925 only sporadic cases have occurred with a case frequency of between 1 and 17 cases per year, mostly located in the Western part of the USA. Endemic countries are several African countries, China, India, South America and an area near the Caspian Sea in Asia. The problem there is the wild rodent plague, which functions as a reservoir for causing human cases. 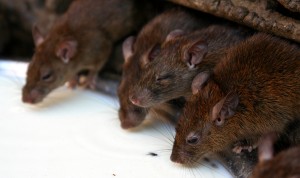 Although we do not hear much about the plague, because antibiotics protect society from outbreaks, the disease is still there in rats and their fleas all over the world. Problems in future could be the development of more resistant strains, although newer antibiotics like the arylomycins have been detected. WHO will continue to watch cases of the plague and investigate their causes.