With the present Ebola virus (EV) epidemic in West Africa it is important to keep things in perspective. Like with any other viral illness one needs to concentrate on where the virus comes from (what are the natural hosts), how is it transmitted, what is the infectious cycle and how can this be interrupted.

Extensive research has shown that local fruit bats that are acclimatize to live in Western and Central Africa are harboring the virus without getting sick from it. As this link points out, the virus can be transmitted to monkeys and to humans. It is important with regard to maintaining an epidemic that the natural reservoir stays stable. In the US these very specific African fruit bats do not exist, which makes it very difficult to maintain a reservoir for the EV to multiply in North America.

Fruit bat feces contain EV, which is transmitted to monkeys or humans by skin contact. EV does not transmit through air, water or food. Body fluids like blood, vomitus, stool and sweat (particularly in clothing, bed sheets etc.) from a patient infected with EV can transmit EV to another person. Semen, vaginal fluid, breast milk and urine were also positive for EV when tested from infected patients. Any contact with these body fluids is dangerous. The virus gets taken up through the skin cells where it multiplies and discharges itself into the blood stream. There it paralyzes the immune system and causes severe immune suppression. The virus then infects the major organ systems.

Ebola has 5 different species with different mortalities. Zaire Ebola virus (ZEBOV), which was first identified in 1976, is the most virulent and the strain of the present epidemic in Africa. It has a mortality rate of up to 85% without proper intravenous fluid replacement, but when supportive measures are given the mortality drops to about 50%. The other species of EV are Sudan Ebola virus (SEBOV); Tai Forest Ebola virus ((TAFV, formerly called Ivory Coast Ebola virus); Ebola-Reston (REBOV) that originated from the Philippines; and Bundibugyo Ebola virus (BEBOV), the most recent species discovered (in 2008). ZEBOV, SEBOV and BEBOV are the three strains that have been associated with large outbreaks in Africa since 1976. 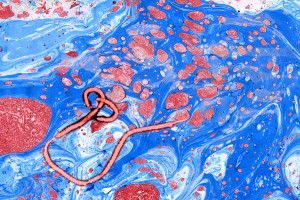 Early signs are a fever with flu-like symptoms, joint and muscle pains, diarrhea, headaches, vomiting, and abdominal pain. Less common are a sore throat, bleeding and skin rashes. Four to five days after onsets of the EV disease hemorrhagic symptoms are in the forefront like nose bleeds, bleeding gums, vomiting of blood, black stools from bleeding into the gut, vaginal bleeding and hemorrhagic conjunctivitis (blood from under the eye lids). In addition patients may also have pharyngitis, oral or lip ulcerations. If the disease does not stabilize, liver damage, kidney damage and bone marrow cell depletion occur with an acute deterioration of the condition. Liver failure can lead to liver coma with unconsciousness; kidney failure very quickly leads to extreme weakness with blood in the urine and uremia, which can also lead to a coma and death. When the bone marrow is infected, platelet and white blood cell production are suppressed leading to bleeding problems and paralyzed immune responses against EV.

After a few days of contact with an EV patient when symptoms are just starting to occur blood tests can give more information, whether the patient has been infected or not. A so-called ELISA test specific for EV can be done. A polymerase chain reaction (PCR test) is also available, which detects EV more directly. Later in the disease process an IgG and IgM antibody test can be taken to prove the presence or absence of EV.

It is in this context that a new experimental antibody, called ZMapp has saved lives. If liver, bone marrow and kidney function cannot be restored by ZMapp the patient has no hope of survival as the virus simply multiplies in these vital organs in the presence of a paralyzed immune system.

Overall 46%of patients in Africa have survived by mounting an immune response against EV, but 54% have died. The patients who survived inactivated the virus through antibodies from their own immune system. ZMapp is a group of antibodies against three surface determinants from three strains of EV which I have discussed in this blog. It appears that the possible toxicity of ZMapp is negligible compared to the effectiveness in treating EV, but the CDC and FDA are still gathering data with every treatment (successful or not) using ZMapp. 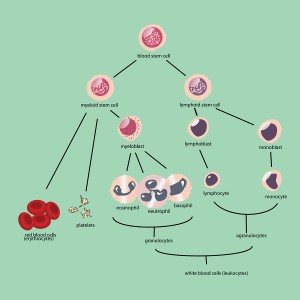 Unfortunately EV is one of the modern dangers and very real in Africa. It has the potential to be transmitted to other humans throughout the world and this is why governments around the world pay close attention to this modern viral illness. Fortunately a large body of knowledge has already been accumulated. Isolation of contacts for 21 days is a very effective way to separate EV patients from the rest of the world population who could potentially get this disease. Persons who have been in contact with EV patients, who were exposed to body fluids and who have symptoms of fever, abdominal pain or vomiting need to be treated early with ZMapp to stabilize the patient’s immune system and stop the EV replication within the body. Fortunately climatic conditions within North America do not support populations of the African fruit bats that serve as a reservoir in Africa. We should therefore think of EV more like a tropical disease that can occasionally lead to flare-ups of human cases imported from Africa. It is not a disease to stay here or pose a threat in the future in North America, unless screening of patients arriving from African countries is neglected.

Ebola virus is an evolving story. We have learnt that it is dependent on a reservoir of African fruit bats from which EV can branch out into wild monkeys and via food handlers and those who come into close contact with monkeys into humans in Africa. Cases in other countries around the world will stay sporadic, as they have to originate in Africa where the reservoir of fruit bats and monkeys is present. Strict isolation techniques and close monitoring with specific blood tests will keep these sporadic cases under control, so they cannot reach epidemic proportions.