In the first place, gouty arthritis hits the patient without any warning, so symptoms of gout are not always clear at the beginning. To clarify, foot gout typically affects only one joint, most commonly the base of the big toe (metatarsophalangeal joint) with big toe joint pain.

In addition, a knee, elbow, wrist or the joints in the hand can be afflicted with gout as well. There is discoloration of the overlying skin (red or purplish), often under tension from underlying swelling or a joint effusion. As a matter of fact, this is extremely tender to the point where a bed sheet touching the skin causes severe pain.

Podagra, the gouty arthritis of the metatarsophalangeal joint of the big toe

There might be an associated fever with chills and a feeling of intense sickness. The classical case of gout of the great toe (metatarsophalangeal joint) has the medical term podagra (Ref. 1). In industrialized countries the patient with an acute gouty arthritis attack receives treatment by a physician and close follow-up to prevent further attacks. This has now led to a certain complacency among the population.

Signs and symptoms of gout 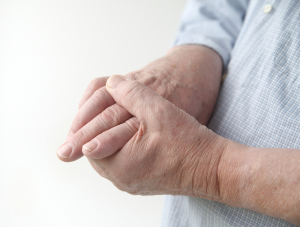 However, in less fortunate countries where poverty is abundant, medicine might not reach these patients and after the initial gouty attack several more will likely follow with a rate of 2 or more attacks per year.

Subsequently gout becomes chronic and it could affect all joints. The joints undergo erosions and severe deformities, which leads to severe losses of range of motion with resulting stiffness of the joints.

There are deposits of urate in the walls of tendon sheaths and bursae. They are called tophi and usually occur on hands, feet and around the outside (extensor side) of the elbow joints. If the tophi get big enough they can erupt and discharge the chalky content of urate crystals (Ref. 2).

Only about 20% of patients with gout develop kidney stones with either uric acid or calcium oxalate stones. These patients often have concomitant other health problems such as high blood pressure, chronic kidney disease such as pyelonephritis or diabetic nephropathy. It is important that these patients are carefully monitored so that their kidney function stabilizes and the uric acid level is brought into a normal range where further kidney deterioration is prevented.