After the history and physical examination the physician has already a high index of suspicion that this likely is gout, but diagnostic tests for gout need to be done to confirm it.

Monosodium urate crystals have a characteristic, needle or rod shape with polarized light microscopy (Ref. 1). X-ray films of affected joints will often show “punched out erosions”, which differ from the ones in rheumatoid arthritis in that they are further away from the joint margin (Ref.2, p.32).

These punched out lesions are due to tophi deposits in the bone close to the joints. They can only be detected when they are larger than 5 mm in diameter, but they are an important clinical sign as they usually precede the formation of tophi in the subcutaneous tissue. If uric acid lowering medication is given in time, then further tissue and joint damage can be prevented from happening (Ref. 1). 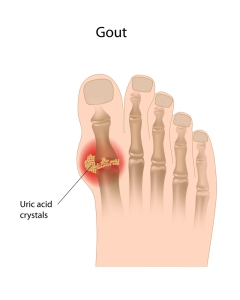 It is easy to be misled and this is true for gout as well. Unless there is direct proof of urate crystals, the physician must be careful not to overlook other possible explanations of the patient’s symptoms. For instance, in the past it was thought that a rapid symptoms relief within 24 hours of starting colchicine would be proof of gout.

It turned out that CCPD (pseudogout) can also give such a favorable response.

An acute joint arthritis in a young person often may mimic gout, but usually is due to juvenile rheumatoid arthritis or acute rheumatic fever.

The younger age group rarely gets gout, unless it is due to one of the rare congenital enzyme defects of the purine metabolism. Acute septic arthritis can present as if it were gout. However, joint aspiration shows acute inflammatory cells and bacteria. Other forms of arthritis such as rheumatoid arthritis and osteoarthritis must be delineated (Ref. 1 and 2).