The patient suffering from tinnitus hears a noise or ringing in the ears.

Objective tinnitus: Some of these noises may be objectively produced in the patient because of patent eustachian tubes or because of vibrations of the soft palate. There are physical reasons for noises that are generated and that are picked up through sound transmission by the inner ear through bony conduction.

Along those lines are vascular noises from carotid artery hardening or from head tumors with a lot of blood vessels. The physician may often be able to hear these noises as well placing a stethoscope on the patient’s head or neck (Ref. 2, p. 1730).

Subjective tinnitus: More often only the patient can hear the tinnitus.

With Menieres disease there is a low pitch, ocean roar like tinnitus, which becomes very loud immediately before a vertigo attack starts. After the attack it can disappear. A continuous high pitched tinnitus on both ears is associated with damage to the hearing cells following explosions, exposure to industrial noises, toxic effects of chemicals or drugs and with general hearing impairment from aging (called “presbycusis”). 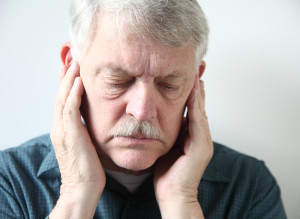 It is best to go to a university affiliated multidisciplinary tinnitus clinics to have a thorough work-up to rule out any treatable conditions.

One such treatment center can be found under this link (thanks to www.ohsu.edu for this link). When all of the treatable conditions have been ruled out and the tinnitus is still present, there are some special hearing aids that are available. They produce more pleasant background sounds, which can be utilized for blunting of tinnitus.