Deafness and hearing loss are a common problems in an aging population.

About 10 to 15% of the population is affected with this. This translates into about 30 million people in the United States that are affected with hearing difficulties. This has an enormous impact on the economy, but also on the emotional well being as deafness leads to major communication problems, social isolation and chronic depression.

Many accidents could perhaps have been prevented had hearing been restored with appropriate hearing amplification. A lack of hearing definitely adds a risk to a person’s life as good hearing serves as a protective reflex. Here are some common causes of hearing loss:

One of the most common losses of hearing is conductive hearing loss from a buildup of wax (cerumen) in the ear canal. This needs to be flushed out by the general practitioner with a large ear syringe and warm water. However, the eardrum must be intact or else the physician may cause a middle ear infection (otitis media) by the attempted cleaning procedure. If there is a perforated ear drum the patient should be referred to an ear/nose/throat specialist (otolaryngologist) who likely will use a vacuum with a sound to clean the ear canal out. Sometimes the perforation needs to be closed with a small ear surgery (tympanoplasty).

Tympanosclerosis is a condition where the tympanic membrane has undergone some hardening. This may have been due to scarring after an ear drum perforation. The scar later tends to calcify and harden. This needs a referral to an ENT specialist to investigate whether a surgical approach is feasible or whether hearing can be restored with a hearing aid.

This is a genetic condition where the stapes, one of the 3 hearing bones, fuses with the tympanic membrane and leads to a conductive hearing loss in the middle ear. About 10 % of the population suffers from this treatable condition. The ear/nose/throat surgeon (otolaryngologist) can replace the defective hearing chain with a functioning one, and hearing is restored. 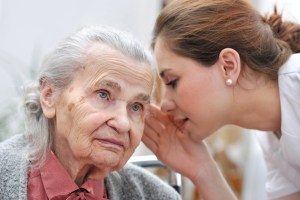 A cholesteatoma is a benign tumor that originated from epithelial cells from the tympanic membrane when it perforated with an ear infection. It may appear that everything healed well first until the hearing disappears, pressure builds up in the affected ear, and eventually ear aches develop.

What went wrong ? Parts of the displaced cells kept on growing in the middle ear forming a tumor that does not belong there. With a CT scan this condition can be easily diagnosed, after which it can be surgically removed (Ref.2, p. 1727). Here is a link to a picture of a cholesteatoma. The ENT surgeon needs to remove this usually by an open procedure where the inner ear is visualized through an approach from behind the ear lobe. When it is detected early enough, hearing loss can be avoided. Otherwise, there may be a permanent hearing loss. 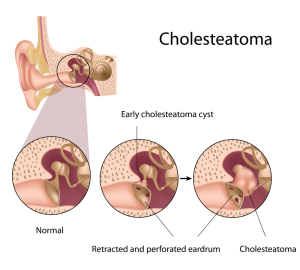 Deafness (Cholesteatoma Can Cause It)

The otolaryngologist will arrange audiometry, a test where the threshold of sound recognition is measured in a sound proof chamber using different frequencies between 250 and 8000 Herz.

This is plotted on a diagram (called audiogram) for both, the right and left ear. Another simple test that is done at the same time is a test of speech discrimination. There are much more sophisticated tests available using various electronic instruments where the vibrations of the tympanic membrane can be measured (tympanometry), where the reflex between sound formation and stapedius muscle contraction can be measured (acoustic reflex testing) and other electrophysiological tests that may be needed before deciding, if a patient would benefit from a cochlear implant.