With ear canal infection (medically known as  otitis externa) it is the lining of the ear canal that is infected. This can lead to acute swelling and accumulation of debris and ear wax in the ear canal to the point where the ear canal is entirely blocked .

If this is not treated right away, it can develop into an acute emergency as the pus and the bacteria become invasive and destroy the bone underneath the soft tissue lining.

Invasion of the infection into the mastoid bone (the bone behind and underneath the ear), into the middle ear, the temporal bone and the labyrinth (where the balance organ is located) are some of the life threatening complications. The persons who are mostly affected are children because of the small anatomy.

However, teenagers when the ear canal has been irritated from chlorinated water by diving and swimming (“swimmer ear”); the aging population, particularly in nursing homes, where often Pseudomonas infections can spread into the ear canal; also people with a weakened immune system such as diabetics and AIDS patients. In this latter group there are often fungal pathogens such as Candida albicans that are the offending agent.

When the soft tissue gets invaded by bacteria there is often a swelling of the soft tissue behind the ear lobe, sometimes with swelling of the ear lobe and possibly a red streak (lymphangitis) behind the ear lobe (Ref. 2, p.1731). Painful lymph glands in the neck region just under the ear lobe may also be noted. Malignant otitis is the condition where bacteria invade soft tissue and eventually bone (facial bone, inner ear, labyrinth and brain). This can happen in people with advanced age who have a weak immune system and who may not have communicated the initial symptoms, or in AIDS patients whose immune system is too weak to fight back. 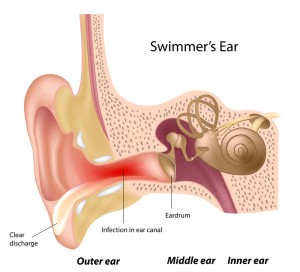 The diagnosis is usually done clinically. Often in the very young and in the very old age group there can be a problem of communicating the symptoms and for this reason there is a danger of delayed assessment and treatment in the early stage. In the malignant otitis externa  CT scan and SPECT scan (thanks to casereports.bmj.com for these images) can be helpful to assess the depth of infection. These tests tell the physician how deep the infection has spread and whether or not debridement surgery would have to be done by an ENT specialist.

Treatment consists of a combination of local cleaning out of the debris, ear wax and infected material from the ear canal and oral antibiotics. In most cases it is satisfactory to clean the ear canal out once or twice per week. However, in some cases this has to be done more often. In malignant otitis externa the specialist may want to admit the patient to be able to closely follow the condition and debride when necessary to rescue as much as possible of the healthy tissue. Pseudomonas aeruginosa, which is a problem bacterium, is often involved in these cases. Antibiotic ear drops and intravenous antibiotics are combined with physical cleaning out of the infected material. Without active intervention these patients would succumb to brain abscesses or septicemia. However, most of them will survive with aggressive intervention as described above (Ref. 2, p. 1732).