Alcoholism is on of the drug addictions and is usually associated with the use of street drugs, the abuse of prescription painkillers or illegal drug use. It is easy enough to overlook the fact, that alcohol is the most commonly used drug. Due to the fact that it is legal and freely available and alcohol use is socially acceptable, it is not a surprise that alcoholism is the most common disorder. Alcoholism is a chronic illness. It is also an aging substance as it is a cell poison.

About 75 % of the adult population of America drinks alcoholic beverages.

About 10 % of the population of North America suffers of alcoholism or have experienced some problems with alcohol misuse at one time or another.

Males are more often affected than females. (The male to female ratio is about 4:1) and the age of onset is earlier in males than in females.)

People who develop alcoholism usually start as regular alcohol users, but then increase their consumption and become heavy regular users. There is usually one point, which the person will remember when “there was a switch”. The habit is no longer a habit, but it has become an overpowering urge to drink. The onset is so insidious that the progression from habit to addiction is not even noticed. Societal factors play a role. Children of alcoholics have a higher risk to become alcoholics. Certain personality traits like shyness, hostility, a history of a broken home and a disturbed relationship with parents play a role.

Severe dependence or addiction is the hallmark of alcoholism. Denial of the condition is common. Frequent intoxication is obvious. Unreliability at work (accidents and absenteeism) and conflicts with the law (drunk driving) will have a serious impact on daily living and relationships. High doses of alcohol, which chemically is known as ethanol, will cause serious damage. Ethanol is a cell poison that damages various organs. It kills brain cells, depresses the central nervous system and manifests its damages in the form of liver cirrhosis, gastritis, pancreatitis and damages to the heart (arrhythmias). Inadequate nutrition and inadequate glycogen storage are often present, as well as nutritional deficiencies (thiamine deficiency). These deficiencies coupled with the toxic action of alcohol are also responsible for peripheral nerve degeneration and brain damage. 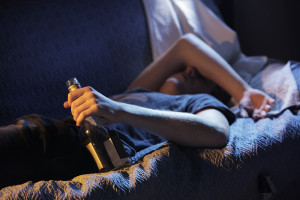 Persons may die after heavy drinking, as a lethal dose is only minimally higher than an intoxicating dose. The most common cause of death is either respiratory depression due to an alcohol overdose or aspiration after vomiting.

Essentially ethanol (alcohol) has the effect of a slow chemical burn on the central nervous system and nerves in general.

Degenerative diseases of the brain like Korsakoff’s syndrome and Wernicke’s encephelopathy can develop as a result of alcohol abuse. In CT scans the superior vermis and the anterior cerebellar lobes show atrophy. Another condition, Marchiafava-Bignami disease, is a demyelination of the corpus callosum, the part of the brain that connects both brain halves. This degenerative brain condition is associated with agitation and progressive dementia. Some patients recover over several months, provided they are detoxified, but others will deteriorate despite all medical efforts. Seizures add to the complications, followed by coma and death.

Alcoholic patients may seek treatment for their drinking or they may be coming into hospital with problems like liver disease or delirium tremens. At this point it becomes possible to address the problem and offer help, which may be accepted or vehemently denied. Treatment of alcoholism belongs into the hands of professionals. After heavy alcohol abuse the addicted patient will not be able to quit on his own. Alcohol withdrawal is associated with withdrawal symptoms such as tremor, weakness, sweating, overactive reflexes and symptoms of the gastro-intestinal tract, such as vomiting and abdominal pains. Symptoms will occur beginning 12 to 48 hours after cessation of alcohol use. Some patients have tonic-clonic seizures (alcohol epilepsy, also dubbed “rum fits”).

It is essential to help the patient in a clinical setting to cope with any withdrawal symptoms, some of which can be severe and dangerous.
Abrupt abstinence after heavy use often produces hallucinations, which are terrifying to the patient. Usually these hallucinations that resemble a schizophrenic disorder are transient, and recovery occurs within 1 to 3 weeks.

Delirium tremens is a more severe condition. The onset is usually 48 to 72 hours after alcohol withdrawal. Confusion, disorientation, restlessness, frightening dreams and hallucinations are common. The patient’s temperature and pulse rate are elevated, and a high fever is a warning sign. Delirium tremens can be fatal, but usually it is self-limited and should resolve within 24 hours.

As a first step alcohol is withdrawn.

Medication may be needed if withdrawal symptoms are severe.

The mainstays of therapy are benzodiazepines. Dosage depends on vital signs and the mental status of the patient. They are mostly used for sedation in the agitated phase of the patient who undergoes withdrawal. Phenobarbital is useful for conditions like severe delirium tremens. Hallucinations respond to treatment with chlorpromazine or other antipsychotic medicine.

Many patients can be detoxified without drugs, if proper attention is given to reassurance and psychological support. Specialized clinics for the treatment of alcohol addiction work with psychologists and therapists in an approach and environment that is supportive and non-threatening. The patient’s behavior has to undergo a change to achieve and maintain sobriety. The patient has to be warned that trying to drink “in a controlled manner” will only lead to excuses to drink more and get out of control again. Various types of psychotherapy have been used in detox programs. Group therapy is considered superior to the one-on-one approach.

This medication, also known under the name of disulfiram interferes with the metabolism of acetaldehyde (a product in the oxidation of alcohol). The accumulation of acetaldehyde causes great discomfort. If the patient drinks any alcoholic drink within 12 hours of taking disulfiram, he will experience throbbing headaches, a fast heartbeat and sweating. Nausea and vomiting will follow in 30 to 60 minutes. The patient may feel dizzy and faint, and the reaction will last 1 to 3 hours. The discomfort is so intense that few patients risk ingesting alcohol while they are on disulfiram. Antabuse works in the sense of a chemical behavior modification. Patients who have been free of alcohol for 4 to 5 days can use the medication. They as well as their families have to be warned that the effects of the drug may persist for 3 to 7 days after the last dose. It also means that the patient cannot use alcohol-containing medicines, tinctures and cough syrups. Disulfiram is only useful for compliant patients. Follow-up by a physician is necessary to ensure and encourage continuation as part of an abstinence program. The drug is unsuitable in patients with cardiac decompensation and contraindicated in pregnancy.

The work of AA groups has been of invaluable help to group members within the group as well as to alcoholics to whom they reach out.

These groups provide the patient with non-drinking friends who are always available. It gives the patient access to an area where it is possible to socialize away from the pub. The patient has to find a group in which he is comfortable. Some groups in large metropolitan areas have AA groups where the members share other interests like groups of physicians and dentists.

In the group the patient will hear of persons who are on the path of healing from alcohol addiction. He will hear others confess in front of the group every rationalization he has ever thought privately for his own drinking. He will find himself in the role of helping others again, which will give him self-respect. He will also find confidence, which he previously found only with the help of alcohol.

The group also offers help to family members who live with alcoholics. It is believed that the voluntary approach of AA may be the most effective one. Non-voluntary enrolees who are ordered to attend by court order or probation officer order may recognize the support of the group as their chance to turn their lives around. If the person is not motivated or receptive, the benefit of AA would likely be less significant.

Alcohol addiction has to be seen as a condition that needs lifelong vigilance, and AA members take the commitment to sobriety serious.