High risk pregnancy and genetics are linked: When there are major genetic abnormalities in the fetus, there is a higher rate of miscarriages. A percentage of pregnancies (up to 20%) are lost because of spontaneous abortions (=miscarriages). In early pregnancy (first 4 months) about 60% of them are due to chromosomal abnormalities, which becomes apparent when the aborted material is analyzed with a genetic test (Ref.3, p. 396).

When genetic abnormalities in the fetus do not get aborted spontaneously, there is a higher risk of other problems: polyhydramnios (also known as “hydramnios”, where too much amniotic fluid is present) as well as oligohydramnios (=too little amniotic fluid) are both associated with fetal abnormalities.

Hydramnios can be an indication of a missing esophagus in the fetus, neural tube defects such as spina bifida or anencephalus (=missing head), multiple pregnancy or uncontrolled diabetes. Oligohydramnios can be an indication of a urinary tract disorder, problems with fetal growth or even fetal death. On the other hand, in about 50% of cases of amniotic fluid abnormaities no cause can ever be found and normal babies are delivered.

With genetic abnormalities being so much more common for mothers older than 30-years of age, the American College of Obstetricians and Gynecologists (ACOG) has recommended that some sort of screening should be done as follows Ref.19, p.226).

The amniocentesis test is done under ultrasound guidance in order to minimize the danger to fetal injury. Infection rate (amnionitis) in the mother occurs in about 0.1%.

The risk of amniocentesis induced abortion is only 0.5% above controls, which was considered a “remote” risk, but this still means that 5 in 1000 fetuses died because of the procedure. With amniocentesis chemical analysis of the fluid can detect certain enzymes,alpha fetal protein and DNA tests can be done with fetal cells that are floating in the amniotic fluid. Chromosome tests of fetal cells can be performed by the geneticist.

Another test exists, chorionic villous sampling, where with the help of ultrasonic guidance a sample from the placenta is obtained to do DNA testing on the cells. This procedure can sometimes be technically simpler than amniocentesis. On the other hand there is a procedure associated fetal mortality of about 2.5% due to mostly induction of premature labor and associated complications to the fetus (Ref.19, p.226). DNA sampling is useful to diagnose cystic fibrosis, thalassemia, sickle cell anemia, muscular dystrophy and hemophilia.

In pregnancies older than 18 weeks another technique, fetal blood sampling from the origin of the umbilical cord, can be done.

This is useful to diagnose fetal blood disorders such as various hematological disorders and rare blood group incompatibilities. However, the complication rate is in the order of 10 to 20%.

As there is an implication that a pregnancy with a serious genetic abnormality of the fetus would not be acceptable and should be terminated with an abortion procedure, this topic is very contentious.

Religious concerns of killing an unborn child come into play. On the other hand these methods are not 100% reliable. The alpha fetal protein test in combination with the other two blood tests (“triple test”) is about 90% reliable in detecting a neural tube defect and about 60% reliable to detect Down syndrome. Even with invasive cell sampling techniques the reliability of the tests will always only be in the high 90% range, but never reach 100%. This leaves the couple with the difficult ethical question whether to test or not. Once a risk is identified, should the woman undergo amniocentesis or another more invasive test? There is the possibility that this test comes back as genetically abnormal. Will the couple be able to decide to go for a therapeutic abortion? This is often a very trying time for the couple and may require counseling. 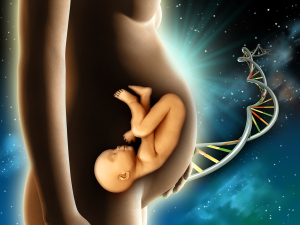 What, if the result is “normal”, but later a baby is born with a genetic abnormality (called a “false negative test”). Will the couple now give up this child for adoption or live with the baby’s genetic abnormality? How will the couple feel, if there is a “false positive test”: the baby was normal, but the therapeutic abortion was done (this might not be communicated to the couple). All of these questions should be openly discussed among the couple, perhaps even before the pregnancy is under its way. Even when there is input from a religious person or a physician, the final decision will always fall back onto the couple and in particular the pregnant woman (if the father abandons his pregnant partner).