80% of the cases develop spontaneously (by de novo deletion of the short arm of chromosome 17, see more details under Ref.1 below). 90% of cases have a loss of the LIS1 gene, which leads to a malformation of the brain; however, there is a spectrum of Miller Dieker syndrome where many other adjacent (contiguous) genes are lost as well, which adds to the high mortality rate of these babies depending on what organs are affected.

The major genetic abnormality in this syndrome is the lissencephaly, which is a malformation of the outer layer of the brain cortex. An MRI image of such a brain malformation (type I lissencephaly)  would show a lack of surface structure (gyri) and an increase of the hollow space inside the brain. Surviving individuals have severe mental retardation. They have low set ears, severe vision problems, a high forehead and a small mouth with a wide upper lip. Initially there is a normal head size at birth, but by one year they have a much smaller than normal head circumference (microcephaly), because of poor brain growth. Convulsions (seizures) happen frequently within the first few weeks to months. Feeding is extremely poor and there is a constant danger of aspiration of baby food as the normal swallowing and cough reflexes are poorly developed. Aspiration pneumonia and infections are common leading to a high mortality in the first year. There can be other genetic abnormalities affecting the heart and kidneys. Cleft palates are also common leading to even worse feeding problems.

A special technique called FISH (fluorescent in situ hybridization) can be used on cultured blood lymphocytes to look for the genetic deletion on chromosome 17 at the 17p13.3 location. CT or MRI scans will show the brain abnormalities mentioned above.

Most babies with Miller Dieker Syndrome die in the first three months of life and most infants are dead from complications of seizures, aspiration pneumonia etc. within two years of age. Occasionally individuals will live for several years. 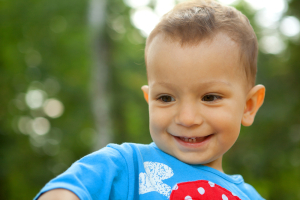