47,XYY Syndrome affects 1 in 1000 boys; it has a special karyotype (an extra Y chromosome). Another name for it is XYY Syndrome.

However, their physical and mental makeup does not differ from the normal 46, XY male. Here is a summary from the “Pathguy“  (thanks to www.pathguy.com for the image) regarding a male with the 47,XYY syndrome. On average 47,XYY men may grow several centimeters taller than their siblings or parents. Contrary to popular fictional literature and movies aggression is not associated with the extra Y chromosome. Fertility is normal. The reason for the extra Y chromosome is that an error occurred during father’s sperm production where there was a so-called “no disjunction” during metaphase I or II. This led to the production of sperm cells with the extra Y chromosome. After impregnating an egg this results in a boy where all the somatic cells contain the 47,XYY constellations. This is called the 47,XYY syndrome.

There are no overt signs and symptoms. More detailed studies with respect to intelligence found that about 50% of boys with this syndrome have a learning disability, but 10% of normal 46,XY boys also have this, so there is only a 40% more frequent effect. Associated are delayed speech and language delay. Testosterone levels are identical with that of normal boys and men. The only reason this syndrome was detected, was when Avery Sandberg from the Roswell Park Memorial Institute in Buffalo, New York, was karyotyped in 1961 because he had a daughter with Down’s syndrome. But this was only an incidental finding of no consequence.

This is a genetic variation of no consequences as these men father normal children and the males are normal with normal intelligence. They tend to choose occupations where practical skills are required. 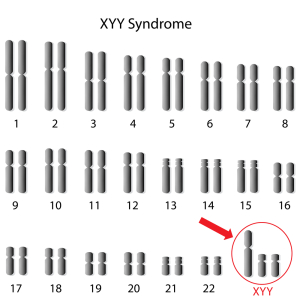