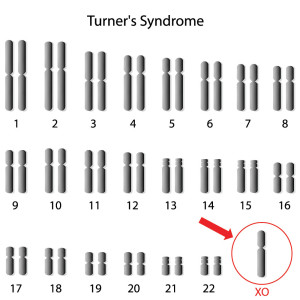 Some of the typical features of Turner syndrome are: Puffy back of the hands and top of the feet from blockage in lymphatic drainage; skin folds from neck to shoulders (“web neck“); short stature, chest is broad with nipples that are widely spaced; low hairline in the neck region; many pigmented nevi (brown spots) on the skin; 4th metatarsal bones and 4th metacarpal bones shortened (here the 4th and 5th metacarpal bones below the three bones of the 4th and 5th fingers are shortened) ; aortic valve disease; kidney abnormalities are common; hemangiomas are also common and if these are in the gastrointestinal tract, a bleeding small intestine can result from this.

Intelligence of persons with Turner syndrome is within the normal range, however math skills are often poor, but they excel in language skills. Ovaries are replaced with fibrous tissue, so during the expected time of puberty there is no breast development and periods do not develop. Female hormone replacement will bring on puberty and breast development. 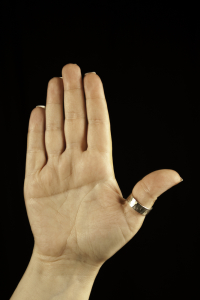 However, due to missing eggs in the ovarian streaks there is infertility. To complicate things, in about 5% to 10% of Turner syndrome females puberty happens normally and in rare cases normal pregnancy has also occurred. These cases likely were mosaic Turner syndromes.