The stomach wall has 4 major layers that will be mentioned below for staging of stomach cancer.

The cancer starts in the superficial lining called “mucosa”, which is the first layer. The next layer below it is called “submucosa”. It contains lots of vessels and lymphatic drainage channels that become important for the spreading of stomach cancer. The third layer is the muscle layer (=medical term “muscularis propria”), which contracts when you feel a “knot in your stomach”.

The fourth layer on the outside of the stomach is called “serosa”. It is a shiny membrane attached to the outside of the stomach thus facing the abdominal cavity. This layer becomes inflamed when cancer invades it, becomes sticky and adheres to neighboring structures such as the transverse colon or the small intestine. This explains how fistula to neighboring organs form in the advanced stages of stomach cancer.

Here is a simplified summary of the staging for stomach cancer:

IV :  adjacent organs involved, lymph node metastases as above and also in area of pancreas, back of upper abdomen and paraaortic region. Liver metastases also present.

Briefly, stage I is confined to the mucosa lining and at the most invasion into the submucosa layer. With stage II the invasion likely goes through the whole stomach wall, but is still confined to a local area.

With stage III the tumor cells have invaded the serosa layer and have migrated further through the lymphatic system along the arteries of the stomach, liver and spleen. Spread has occurred even more with stage IV, where the cancer has metastasized into the liver and into the lymph glands of the upper abdomen. At the later stages of stage IV there can be metastases in every major organ system through spread via the blood stream.

In the following image the patient has developed bowel obstruction because of an invading stomach cancer. The typical X-ray findings are dilated bowel loops with fluid levels in them. This cancer would be stage IV. 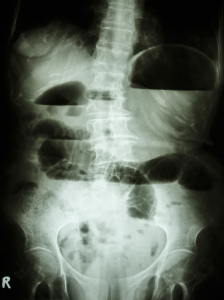