There are two separate factors that are important with respect to causes of stomach cancer.

One is environmental and the other is genetic. The environmental factors listed below in the table lead to a histological change of the lining of the stomach, called “intestinal metaplasia”, which means that there is a patch of lining having the appearance of small bowel lining, but surrounded by stomach lining. This is abnormal and the chronic irritation by stomach acid eventually leads to a form of scarring called “atrophy gastric”.

The end stage of this process over several years is then called “atrophic gastritis, which is associated with pernicious anemia. This condition is associated with vitamin B12 deficiency, but more importantly with gastric cancer. The genetic factors were suggested by the observation that people with blood group A have a higher rate of stomach cancer.

Even though women are normally less frequently plagued by stomach cancer, if a woman has blood group A there is an increased risk for stomach cancer. Also in younger patients, where normally stomach cancer is very rare, females belonging to the blood group A have an increased risk. This is an important fact, which should lead to regular gastroscopic screening in these women. There are certain families where stomach cancer is more common than in others. Such a historically well known family was the Bonaparte family, where Napoleon, his father and grandfather all died of gastric cancer (Ref. 1). The following table is composed from data based on Ref.1. 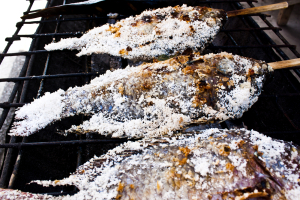 Although there is a genetic predisposition in certain families as mentioned above, the main factors that cause stomach cancer are found in the food we eat, the water we drink, the cigarette smoke we inhale (if we smoke, but also to a lesser extent as secondary smoke), and the cancer producing substances (carcinogens) we get exposed to at work or in city streets. Some of the items above warrant a few comments: