Provided that it has been diagnosed early, the treatment of melanoma consists of a wide excision of the tumor.

Traditionally the tumor is removed with a 1 cm margin. This will allow for any minor irregularities of the tumor and will also remove local mini metastases that might be attached to the tumor. Only when the pathology report is available will the treating physician know whether all of the cancer tissue has been removed. If it was not, a plastic surgeon will have to remove the remaining tumor by a wide excision.

When there is lymph gland involvement in stage III there would be a need to eradicate any cancer cells by radiation after the initial lymph node dissection. With stage IV disease there might need a need for chemotherapy. Unfortunately chemotherapy would improve survival only by 20%, radiotherapy tends to improve survival by up to 30 to 50%. Immunotherapy can be combined with the other methods, but is still considered somewhat unconventional.

Interferon, interleukin-2 (Ref. 5) and levamisol are all used to stimulate the immune system in the hope to stimulate the immune response of the patient. However, not all that glitters is gold: the death rate with interleukin, for instance, is 1 to 2 % due to myocardial infarction or central catheter related sepsis. On the other hand survival improvements of up to 20% are reported with these adjuvant immunotherapies, which are in addition to the survival improvements mentioned above. Generally speaking though the overall survival rates on the long-term are determined by the original finding at the time of the biopsy. If the tumor was localized at that time there is a good prognosis. If the tumor was widespread and had metastases, the overall prognosis is poor no matter how heroic the treatments are.

Treatment of this tumor belongs into the hands of the general practitioner and plastic surgeon or dermatologist for the early stages (stage I and II). Stage III and IV requires a cancer surgeon and oncologist of a major Cancer Clinic to benefit from the latest in combination therapy. 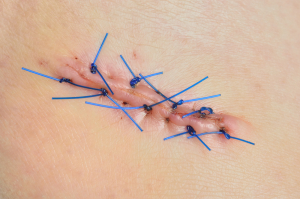 Like with any other cancer so also in melanoma patients depression sets in. As depression is associated with a higher suicide rate, this needs to be addressed by the treating physician. Counseling and, if necessary, an antidepressant may be necessary for a period of time.