Melanoma of the skin (also called”malignant melanoma”) has become a very common skin tumor, which develops out of the pigment cells under the influence of the ultraviolet light. It is usually a dark brown, black or purple bluish skin lesion(see below). The frequency among the North American population was 1 in 250 in 1980, but has increased to 1 in 90 in the year 2000. In 1995 there were 32,100 new skin melanoma cases diagnosed in the US. (Ref. 3).Much has been theorized about why this should be, but there is no good explanation for this other than the fact that more people may expose themselves to the sun for longer hours. 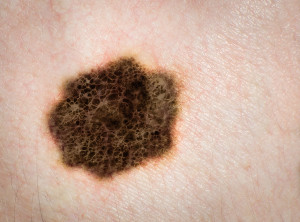 Melanomas consist of mostly dark, pigmented skin cancers, although a few non-pigmented ones also exist. In the following I will be dealing with causes of melanomas, subgroups, staging of melanomas, 10-year survival data, diagnostic procedures, treatment of melanomas and so-called adjuvant therapies. I will also deal with what’s new with respect to melanoma treatments.

Why do melanomas develop? Exposure to sunlight, specifically the ultraviolet B rays (UVB), is significantly linked to the risk of melanoma development. Epidemiological data has shown this: people who live close to the equator have melanomas more frequently.

Migration data showed that subpopulations with a low melanoma rate who moved to areas with more sun exposure turned into high rate melanoma subpopulations. Furthermore we know that melanoma is less frequent in more pigmented people, there is an inverse relationship to the degree of skin pigmentation. There are some genes that also play a role in terms of susceptibility. Also, there seems to be an interplay with carcinogens from the environment, which may remove a repressor gene, and there is a weakening of the immune system locally at the area of repeat sun exposure.

There are four distinct subgroups of melanomas (Ref. 1, 2 and 3): see links “In this section” above for details.

More info on melanoma can be found through this link (thanks to www.cancer.org for this link).