In the first place, basal cell carcinoma is the most common skin cancer in white people in the U.S. and accounts for 77% of all non-melanoma skin cancers.

Notably, about 700,000 new cases are diagnosed and treated each year in the U.S. (Ref.6). In the same fashion, basal cell carcinoma grows in skin that has been pre damaged by exposure to ultraviolet light. Certainly, it rarely metastasizes like other cancers do, but it invades underlying surfaces including bone. It is important to realize that this skin cancer used to be a cancer of the older generation.

However, because of the obsession of suntanning from teenage years on it is indeed not unusual to see patients in their 30’s or 40’s with the first basal cell tumor. Once the person has developed one basal cell cancer, there is a higher likelihood of developing more later in life. By the time a person has had 10 basal cell cancers, there is a probability that this person will develop one more such cancer in each following year. 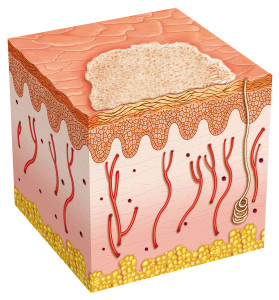 In general, the clinical appearance of the basal cell cancer is a skin colored to pink, shiny, raised papule which is slightly translucent and slowly growing. To explain, it may ulcerate in the center as it enlarges and develop a rolled border. It is important to realize, there are various variations, which would be very familiar to the dermatologist to whom this patient should be referred to.

Basal cell cancer can be treated by various means such as chemotherapy with topical 5-FU , radiotherapy or cryosurgery, which has a cure rate of 90% to 95%. However, a surgical technique called

Mohs’ micrographic surgery has a success rate of 96% to 99% (Ref. 4). This technique consists of a combination of microscopic shavings and analyses of the removed layers as frozen sections by the pathologist. With this method the dermatological surgeon can remove the last cells of the tumor under “microscopic” vision. This way not too much and not too little tissue is removed, which eliminates the danger of cancer recurrence almost completely.