Treatment Of Cancer Of The Pancreas

For one thing, with regard to treatment of cancer of the pancreas it is important to note that only stage I patients are surgically resectable, while patients with the other stages are not. Indeed, in a large series there were only about 25% of all patients whose pancreatic cancer was amenable to resection (Ref.1, p.858). It must be remembered that surgery for pancreatic cancer patients with stage I cancer is a horrendous one. That is to say, it lasts on average 7 hours and should only be done in a large Cancer Center, where the mortality rate for pancreatic cancer surgery now is only about 5%  (in the past it was in the 20% to 30% range).

Pancreaticoduodenectomy: this includes removal of gallbladder, stomach outlet, common bile duct, head of pancreas with the cancer in it, all parts of the duodenum and the fist part of the small intestines.

Choledochojejunostomy: this reconnects the common bile duct stump to the small bowel.

Pancreaticojejunostomy: the cancer-free tail of the pancreas is connected to the small bowel.

Gastrojejunostomy: the stomach is sown to a loop of the small bowel.

The Whipple procedure is only for patients who have stage 1 cancer of the pancreas. However, there is still a high recurrence rate, as microscopic metastases will regrow later on. In one trial physicians compared a group of patients with stage I pancreatic cancer treated with surgery only and compared this to a comparable group treated with surgery first and subsequent radiation and chemotherapy to eradicate micro-metastases. 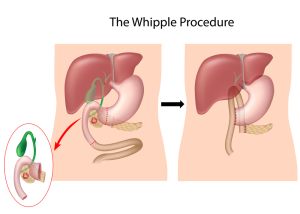 Treatment Of Cancer Of The Pancreas

Effect of radiation and chemotherapy on cancer of the pancreas

Notably, chemotherapy and radiotherapy are not changing the survival figures for patients with stage II or III pancreatic cancer. In particular, surgery has been shown to actually worsen the survival outlook in these patients and this is why at present this is not recommended.

Specifically, the only hope for future breakthroughs in therapy for pancreatic cancer is a new approach, which includes some form of stimulation of the paralyzed immune system. Indeed, such research is on the way as can be seen from Ref. 3 and 4.