In the first place, pancreatic cancer staging is difficult as mentioned above, because most of the time when pancreatic cancer is diagnosed, it is altogether found to be in a late cancer stage. Certainly, this is due to the fact that there is no good screening test available comparable to the PSA test for prostate cancer.

However, this may change in the not too distant future. Unfortunately though for patients being diagnosed with pancreatic cancer now this translates into a rather poor survival outcome as the cancer has already spread into lymph glands along the aorta and into the retroperitoneal space. In fact, it often also has spread into adjacent organs and into the abdominal cavity. Notably, from there it is a very short distance into the blood stream and then into any organ system of the body causing distant metastases.

Here is a summary of the TNM staging system adopted by the American Joint Committee for Cancer Staging (modified from p. 852, Ref. 1):

I :       Cancer localized to pancreas, may be extending directly to stomach, bile duct or duodenum, without regional lymph node metastases 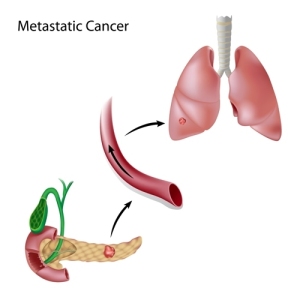 To clarify, from a practical point of view staging means that those patients with stage I can be helped with surgery. In general, in stage II the cancer is too advanced locally, which makes it impossible to remove surgically. Stage III has regional lymph glands that are affected. Stage IV has distant metastases, which is a very poor prognostic sign.