The diagnosis is done most directly by biopsy of affected lymph nodes. Immunophenotyping is also very helpful.

This is a method, which determines through the use of monoclonal antibodies, which surface antigens the leukemia cell is carrying. A certain constellation of markers is typical and very specific for a non- Hodgkin’s lymphoma.

A different constellation is typical for Hodgkin’s lymphoma. Some of the more rare forms of these lymphomas can be classified by using these tumor markers. 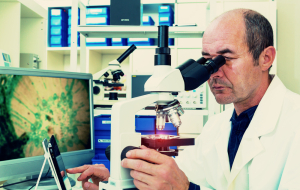 The International Non-Hodgkin’s Prognostic Index divides the NHL into low-grade lymphomas, intermediate-grade lymphomas and high-grade lymphomas. This is based on risk group analysis. The following table is a simplified version of an article in the New England Journal of Medicine (Ref.1):