In the first place, treatment of brain cancer is different depending what brain cancer type is present. In general, a brain tumor should be removed as soon as possible. Certainly, this removes tissue that does not belong into the brain or the spinal cord and prevents central herniation.

In addition, it also removes the possibility of cancerous degeneration in a benign tumor mass as the tumor ages. Equally, the other advantage is that a smaller tumor is easier to remove in one piece than a larger one.

The neurosurgeon does not want to take a risk of leaving any cells behind so that the possibility for a future recurrence is much smaller.

Notably, the deadliest of brain cancers remains GBM (glioblastoma multiforme), The prognosis for patients was always poor. Progression used to be swift. Surgery followed by radiation and chemotherapy still only offers a life expectancy of about 14 months for the patient who received the grim diagnosis.
Dr. Amy Heimberger, a neurosurgeon at MD Anderson Cancer Center in Houston, Texas explains, that the tumor is difficult to treat, as the cells are different and highly invasive. It can be compared to unscrewing a saltshaker, and there are small tumor particles all over. For this reason, Dr. Heimberger and his research team think that a vaccination will be more effective. That is to say that with a vaccination the immune system is able to recognize these individual cells, track them, eradicate them or keep them at bay. Dr. Richard Leblanc, director of Mc Gill University’s Brain Tumor Program, agrees.

A vaccination avoids the complications of systemic chemotherapy. Initial results are promising. Patients who had the usual treatment of surgery, radiotherapy and chemotherapy and the added vaccination lived longer. The median survival was at least 19 month. The non-vaccinated group only survived for an average of 7.1 months.
In order to optimize the defense of the body, it is still important to remove as much of the tumor as possible. The current vaccination is not the only tumor-specific antigen. Researchers will soon be screening tumors to see what antigen targets they’ll be sensitive too. The vaccination can then be selected accordingly.
The advantage of the current vaccine is that it can be given “off the shelf”. Three injections over a two-week period are needed, after which monthly boosters will follow.

As mentioned above, they are benign, but should be removed because of the pressure they exert onto the healthy structures around them. Also some meningiomas will degenerate into cancer later on. Medium and large meningiomas can be removed surgically. However, with very large ones it may be dangerous and technically impossible to remove the tumor with conventional neurosurgery. Other techniques have been developed such as stereotactic radiosurgery utilizing the gamma knife or a linear accelerator. This can only be done at specialized university centers.

Some of these techniques are also used for incompletely resected tumors. 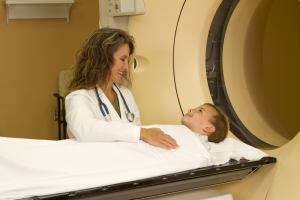 This category would include astrocytomas and oligodendromas. The official therapy for these brain cancers is neurosurgical resection followed by radiation therapy. The overall prognosis is about 3 to 5 years before a relapse of the tumor.

This type of cancer is more rare than the others and occurs at the lining of the passages of the cerebrospinal fluid inside the brain and the spinal canal. Treatment consists of neurosurgery followed by radiation therapy. The overall survival rate over 5 years is 50%. If there is no recurrence visible on MRI scans following the surgery, survival can be more than 70% at 5 years.

This type of brain cancer appears in a first peak in the age group of 5 to 9 years. There is a second peak at the age of 20 to 30 years. As this cancer has a local metastases rate of about 30% at the time of diagnosis the therapy consists of whole head radiation, spinal cord radiation and radiation to the back part of the brain where the cerebellum is located.

It is there where most medulloblastomas originate apart from the brain stem adjacent to it. Combination chemotherapy may be necessary either right away or later for recurrences. The long-term prognosis with this therapy is about 50% at 5 years and 40% at 10 years. There are different histological subtypes, with slower dividing cell types being “good risks” and faster dividing cell types being “poor risks”. Shortly after the surgery the pathologist can tell the treating physician whether a particular patient would be considered “poor risk” or “good risk”. The poor risk patients have an overall survival rate of 30% at 5 years, whereas the good risk patients can expect a survival rate of 70% at 5 years.

This is a lymphoma, which originates in lymphatic tissue of the brain. I am discussing this disease in detail under the lymphoma chapter. However, I mentioned it here because there has been a sudden rise in the last few years because of an increase in the number of AIDS patients on the one hand and patients who had organ transplants on the other hand.

In the case of AIDS patients the immune system is weak from the AIDS virus. In case of patients who received organ transplants the anti-rejection drugs are weakening the immune system. Either way the body cannot fight chromosomal mutations that occur spontaneously in the B lymphocytes. Before the AIDS epidemic only 1% of all lymphomas originated in the CNS. Among these 50 % used to be in patients who had received organ transplants. Physicians find the majority of CNS lymphomas in AIDS patients; in second place are patients who had transplants. Treatment is by radiation therapy with or without combination chemotherapy.

These tumors are mostly benign similar to meningiomas. Like with any other tumor early detection of pituitary tumors is important as otherwise blindness could result from the direct pressure onto the optic nerve. These tumors lead to secondary Addison’s disease, which is a deficiency in the pituitary gland hormones. Use this link to get you there.

These benign schwannomas originate from the envelope of the acoustic nerve, which is the hearing nerve. This is a special area for the ENT(ear/nose/throat) specialist. Usually the ENT specialist diagnosis this condition and the neurosurgeon either excises it or else organizes stereotactic radio-surgery for the more complex case. The acoustic nerve comes out of the brainstem and an acoustic neuroma can occur right at this point, which would be extremely difficult to approach with conventional neurosurgery, but would be possible to reach with stereotactic radio- surgery. Without removal of the tumor, the patient may lose his hearing and ultimately be deaf.