Cause Of Brain Cancer

In the following I will briefly discuss what we know about the cause of brain cancer and provide some data on the frequency of various brain cancers.

It is important to realize that brain cancer and spinal cord cancer originates from the various cell types, which are present in that tissue. Another key point is that there seem to be genetic factors on the one hand and environmental factors on the other hand. Indeed, they trigger normal cells to become cancerous and this process is not any different from other cancers such as leukemia or solid tumors.

Brain cancer throughout the life cycle

In the first place, there is an early peak of brain cancer occurrence in the first 4 years of childhood (frequency of 3 new cases per 100,000 per year). It is less frequent up to age 24. Secondly, there is a steady rise in the occurrence of brain cancer until the age of 65. At that age there is a plateau of 18 new cases per 100,000 per year. Thirdly, from the age of 80 there is another peak in brain cancer development due to aging factors. Most brain tumors have an equal sex distribution except for meningiomas, which are more common in females (Ref. 2).

We learnt first from some familial brain cancers that genetic factors are important in the causation of brain tumors.

Neurofibromatosis I is a familial condition where a child is born with a number of skin pigmentations (cafe au lait spot) in combination with lumps (neurofibroma) under the skin, a brain tumor called glioma attached to the optic nerve and other brain tumors. This disease has been studied extensively and it has been found that the problem originates from chromosome 17, where there is an altered gene (NF1 gene). This disease is relatively common with an incidence of 1 in 3,500 children.

Researches found that there is another gene (NF2 gene), which occurs only with a frequency of 1 in 50,000 children and is located on chromosome 22. These children develop acoustic neuromas (called schwannomas), attached to both hearing nerves. They also develop various kinds of brain cancers (astrocytomas, glioblastomas etc.). Since then geneticists have detected many other loci that can trigger the development of brain cancer. 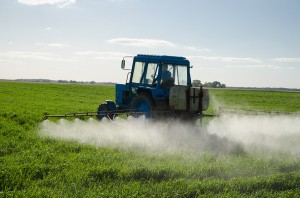 Cause Of Brain Cancer

Another line of research came from chemical exposure data to carcinogens (cancer producing substances). Exposure to pesticides, herbicides, fertilizers and various petrochemical products have been shown to lead to a higher than expected incidence of brain cancer. The exact mechanism of how these chemicals produce cancer is not known. The theories are that on the one hand some chemicals are carcinogens, directly causing genetic changes in cells. On the other hand there are likely some chemicals that destroy tumor suppressor genes that are located on various chromosomes and whose function normally is to protect the body from cancerous brain cell mutations.

Another mechanism causing brain cancer is through viral infections. We do know that there are clusters of gliomas (one type of brain cancer) in schools and communities where an epidemic of mononucleosis has occurred. Mononucleosis is caused from the Epstein-Barr virus and this virus can penetrate into the brain cells. However, it remains a mystery why the majority of patients have an uneventful recovery and a small percentage only comes down with gliomas later in life. The patients who developed a glioma had Epstein-Barr virus in the tumor tissue. The pathologist  who examined the surgical material  from the neurosurgeon’s surgery confirmed the cancer and the inclusion bodies of the virus (Ref. 1 and 2).

The myth of trauma to the head

Physicians treated some cancers such as acute lymphocytic leukemia in the past with radiation of the skull. This was meant to  to prevent CNS induced relapse of the leukemia. Some investigators described a higher incident of astrocytomas (one form of brain cancer) approximately 5 years after the completion of radiation. The incidence appears to be low in the order of 2% or 3 %, but since the introduction of intrathecal chemotherapy for leukemia relapse prevention radiation of the skull has mostly been abandoned (Ref. 2).

Radiation can cause brain cancer

Another observation comes from using X-ray radiation for chronic cases of the dermatological condition tinea capitis (a chronic yeast infection of the scalp). This has lead to an incident of 15 to 20% of meningiomas later in life, an unacceptable situation. Needless to say that the practice of radiation for this condition has been abandoned.The following compilation summarize the frequency of various tumors, separated into brain and spinal cord tumors. It is important to note that brain tumors are 7 times more common than spinal cord tumors (modified from Ref. 1 and 2).