Birth control pills, also just known as  BCP or OC (oral contraception) utilize the fact that in order for ovulation (=release of a fertile egg) to take place it requires a complex interaction between the gonadotropin hormones LH and FSH from the pituitary gland as well as the right mixture of estrogen and progesterone from the ovaries. Without that proper hormonal interaction ovulation will not take place leading to an infertile cycle. With contraception scientists were able to suppress ovulation for as long as the birth control pill is taken regularly.

By giving a small amount of estrogen and progesterone like substance (called “progestin”) in the oral contraceptive form (the birth control pill) ovulation is stopped. The lining of the uterine cavity is stabilized by estrogen and the mucous plug in the cervical canal is thickened making it much more difficult for sperm to enter (Ref. 15, p. 330).

One of the side effects of the pill is promotion of the development of breast cancer. It appears that the risks outweigh the benefits beyond 5 years of hormone replacement. There are also higher risk subpopulations of women who should avoid the BCP as can be seen from this table where the approximate risks for breast cancer are depicted (modified from Ref.15, p. 375).

Risks multiply when it comes to exposure to several risk factors. A woman who drinks 3 oz. of alcohol per day and takes the birth control pill for 10 years has a risk of 3.2- to 3.8-fold of developing breast cancer as compared to a woman who does not drink alcohol and does not take the BCP. This is the reason why no woman who belongs into the above classification should take the BCP or should take estrogen for hormone replacement after menopause. These high-risk women should, if a BCP is desired, take the POP’s (=progestin only pills) as described above.

The risk for ovarian cancer is reduced by about 30-50% when on the BCP. For endometrial (=uterine) cancer the risk is reduced by 30% on the BCP. It is important for any woman who wants to take the BCP to be aware that certain medications, particularly antiepileptic drugs and certain antibiotics can cancel or weaken the contraceptive effect of the BCP. There are many more details that you will want to ask your physician about oral contraception, but the above will have given you a good overview.

Ethical concerns from various religious or church groups regarding the BCP are discussed under “contraceptive injection”. 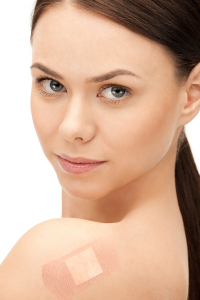 At a conference for family physicians (Ref.27) Dr. Debra Millar, professor of obstetrics and gynecology at the University of BC in Vancouver, outlined the advantages of a patch (Xulane birth control patch) versus the regular birth control pill. Women often forget the pill and when this happens there is a danger of a breakthrough ovulation and unwanted pregnancy. In the past patches were good for only 2 or three days, but the delivery systems and skin adhesiveness of the patch have significantly improved. Now with Xulane birth control patch it is possible to apply the patch for one week as the hormone reservoir reliably delivers enough hormones through the skin and achieves the same birth control effects as the pill by mouth. Xulane is the “pill in a patch”.

Here is how it works: there are three consecutive weekly patch applications, always applied on the same weekly day. The 4th week is off and you get your period. On day one of the period the patch is applied again and the cycle is repeated. If you use the patch, do not exceed seven consecutive patch-free days. In women who weigh more than 198 lb.. (=90 kg) the patch is not as reliable. Discuss this and other questions about the patch with your doctor. Side-effects are comparable to oral contraception. Barrier methods against sexually transmitted diseases need to also be applied similar to the birth control pill. Trials have shown that women were better able to stick to the patch regimen than to the pill form of contraception. The patch withstood exposure to swimming, sauna, whirlpool and treadmill exercises without peeling off.

The birth control pill may work on the short term. However, on the long term it disrupts the woman’s hormone balance as the estrogen-like and progesterone-like synthetic hormones are not bioequivalent. The Women’s Health Initiative (Ref.28) has taught physicians a tough lesson: you cannot mess with nature’s hormones or else you create a risk of strokes (41%), heart attacks (29% more), blood clots (twice as many), breast cancer (26% more), colorectal cancer (37% more) and you increase Alzheimer’s disease (76% more often). This was a trial involving over 16,000 postmenopausal women.

Too much estrogen can cause cancer

Although the hormones used in these women were slightly different in concentration, structurally they are very similar to the ones used for birth control purposes. What nature seems to tell us is that you cannot mess with hormone receptors or you get one of the diseases just listed. At the core of contraception is that scientists thought they could partially block the hormone receptors and this would lead to a reversible blocking of ovulation.

The truth is that these synthetic estrogen-like and progesterone-like substances are not bio-identical hormones and they suppress ovulation, which means they are creating a progesterone deficiency in the woman who takes these synthetic hormones. The artificial hormones are functioning as “xenohormones” and the end result is that physicians create estrogen dominance in these women, which according to Dr. Lee is the reason for the above listed complications (Ref. 29).
The solution to this is not to mess with “new and better hormones”, but to leave the women’s hormones as they have always been. Instead it makes more sense to use less invasive alternatives for birth control methods. A well fitted IUD (inserted by a gynecologist) is a good alternative. This will not create havoc with the woman’s hormones and will not create infertility after contraception is no longer needed (see also Ref. 30). Bio-identical progesterone replacement using creams is being used to rebalance the original hormones.

29. Dr. John R. Lee, David Zava and Virginia Hopkins: “What your doctor may not tell you about breast cancer – How hormone balance can help save your life”, Wellness Central, Hachette Book Group USA, 2005. Page 360 to 374 explains xenohormones.