A couple has a lot of different birth control options at their disposal to prevent or postpone a pregnancy. Here is a brief overview.

Birth control methods ( called contraception medically) is what any method is termed that is used to prevent a pregnancy despite normal sexual intercourse. This chapter contains material that may be offensive to some religious groups and it is a factual summary seen through the eyes of a physician. I will attempt to point out the concerns that some religious groups have about some of the methods (see links to this page for more info regarding the various topics).

Contraception (= OC or BCP) : The birth control pill has been in use since the 1960’s; it is relatively safe, but it offers no protection against AIDS and VD

Ethical Concerns re. BCP : religious groups have moral and biological concerns about the birth control pill

Periodic Abstinence : works with avoidance of “fertile days” for sex; the Billings ovulation method can lead to 99% success with discipline; for women with irregular periods these methods are problematic and not safe

Postcoital or Emergency Contraception (planB) :about 85% successful within 72 hours. Doubling of BCP (Ovral); problematic for those where it does not work, other side-effect: severe bleeding

Vasectomy : permanent method; done as outpatient, can lead to autoimmune antibodies and SLE like disease 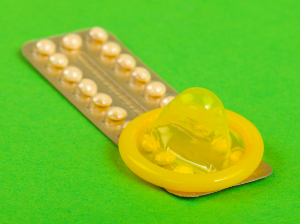 The following is a rough guideline through the difficult choice of what to use for contraception in various age groups (modified according to Ref. 16, p. 719).

There are different requirements for different age groups: in the younger age group there is more concern about prevention of sexually transmitted disease (such as VD and AIDS), but also a desire to avoid an unwanted pregnancy and a combination of condoms and the BCP is likely the best combination.

By the mid twenties the confusion about finding the right life partner has settled for many. Once there is a stable relationship and both partners know that they are VD and AIDS free, there would be mainly a need to prevent pregnancy. This can be achieved with any of the methods listed in the table. Even the IUD would now be an acceptable risk despite the slightly higher rate of pelvic infections and possible infertility risk. For longterm use a copper T – IUD (Paragard) could be used, for shorter term Progestasert.

Above 35 many couple relationships are quite stable and they often have the desired number of children. At this time the couple may want to decide to have either a vasectomy (for the male) or a tubal ligation (for the female) done as a permanent sterilization procedure.

If this is not acceptable for various reasons, then other methods including the Billings method could be used. Beyond age 35 for a woman there is an ever increasing risk for genetic abnormalities of the offspring.

These are suggestions only. With very disciplined couples natural family planning such as the Billings method may be the method of choice. All couples should have an understanding right from the beginning what they would do in case of an unexpected pregnancy because of method failure. This happens a lot more often than couples admit due to alcohol, drugs and a myriad of other reasons. But I am urging people to plan ahead. It may simply be that the couple will accept another child, or give it up for adoption before the last resort of an abortion would be considered.