Why We Are Addicted To Certain Foods

Recently there was an article about bacon on CNN and why we are addicted to certain foods. Certainly one of the foods that many people get addicted to is bacon. Let us take a look at the production first.

The abdominal wall of a pig is where bacon originates from. This is injected with a mixture of salt and sugar as well as a curing agent. The curing agent consists of a mixture of sodium nitrite and sodium ascorbate. Sodium nitrate is considered carcinogenic. Reading this, does not make the product very appetizing.

Smoking bacon in the smoke house

After the marination of the pork meat with the curing agents, it goes into the smoke house. There the meat gets a brown color and the meat flavor intensifies. But unfortunately the carcinogens of the smoky flavor are added as well. Knowing that you now have two carcinogenic substances in this food, should make you want to push away your plate!

In the kitchen the cook heats up the bacon in various ways, on the BBQ, the frying pan, the oven. High heat caramelizes the sugar on the meat. This adds even more carcinogens to the processed meat. And you really want to eat that? You may have lost your appetite by now, but some people who have an addiction to the flavor of this meat find the taste of the cured meat, with the flavor or salt and smoke irresistible. The bad news does not end here:

Since October of 2015 the World Health Organization has warned consumers that red meat and processed red meat contains carcinogens.

Fat of bacon not good for our hearts

Bacon contains a lot of fat. Bacon has about 50% monounsaturated fat and a large part of those is oleic acid. But it is the majority of saturated fat that is not good for our arteries. In addition bacon contains a good amount of cholesterol. Health professionals agree that saturated fat is a risk factor for the development of heart disease. You now have a list of news about bacon; that does not sound good at all. The question is now: why are some people still raving about it?

Linda Papadopoulos is the owner of LP & Associates and a sensory and consumer research expert who managed the sensory evaluation group at Oscar Mayer for seven years. She said: “Bacon is just that perfect combo of the sweet, the salty, the smoky and the savory character. Within savory, you’ve got the cured meat … the roasted browned fat. … It’s just this perfect combination of ingredients that goes right to the brain, which says, ‘take another bite.’ “

When researchers investigated this phenomenon, they found that obese individuals have less dopamine D2 receptors in a part of the brain called striatum compared to lean people who have more D2 receptors. What this means is that an obese person needs to eat more fatty food like bacon to feel the satisfaction that a lean person does.

The same mechanism that underlies drug addiction (the dopamine D2 receptors of the brain reward circuit) is also the reason for addiction to bacon or other fat in our food.

It is of interest to note, that not only humans fall for the smell and taste of bacon. If you bait a mouse trap with bacon, a hapless rodent will go for it! 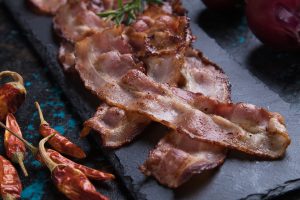 Why We Are Addicted To Certain Foods

Not every person likes bacon. I cannot stand the smell or taste of bacon. But many people love the smell of bacon frying in the pan. It may bring back childhood memories or it signals Sunday morning breakfast, but it paves a way to a habit. Due to the fat content and the taste, a good number of people are progressing into an addiction to bacon. From a health point of view there are problems with regard to the composition of bacon. You get an overdose of salt and sugar. The curing agent contains sodium nitrite a carcinogen. Add to this the smoky substances and the red meat as further carcinogens, coupled with a lot of fat.

You have the perfect concoction to get cancer after a few decades of eating bacon. The fat adds a heart attack and stroke risk. But for those who like the taste of bacon all of these warnings mean nothing. They adore the taste and they come back to it time and again. Chances are that eating bacon frequently reduces the number of dopamine D2 receptors in the striatum of your brain. This means that in order to get satisfaction from bacon you need to eat a lot more than someone who rarely eats it. And this is bad news for your health. Rodents like mice cannot choose to avoid the mousetrap. But now you know better!